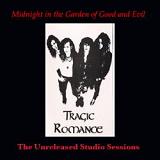 Review:
Tragic Romance is an oddity. They formed in Los Angeles in 1989 and straddled the line between Goth, alternative and Sunset Strip glam. They ended up signing with Century Media who released their live debut, Cancel The Future, in 1993. It was a strange pairing from the beginning, and when Century Media’s head-banging fans refused to accept Tragic Romance‘s twisted brand of hard rock, the label quickly pulled support for the project.

Which brings us to today. Tragic Romance is seeing a resurgence amongst the Goth community, even though they have as much in common with that scene as early Cult. Once again these guys are stuck in a genre in which they really don’t belong, but do they really fit within the confines of any one label?

This isn’t the type of party rock one would expect from a later era Strip band, in fact it is fairly dreary and underwhelming upon first listen. But with repeated spins this CD grows on you. Amid the darkness and lackluster production (these are demos) are strong vocals and great guitar riffs, with the strongest cuts being “The Garden Of Good & Evil”, “Sacred Cow” and (once it gets going) “Awaking Slowly In November”. Because this type of music is rather foreign to me, the best comparisons I can come up with are the aforementioned Cult and Balaam & The Angel.

It would have been interesting to see where Tragic Romance fit within the Sunset Strip scene. I imagine they were too provocative for glamsters, too glam for Goths and too Goth for punks – in other words, always on the outside looking in. It has taken me forever to write this review and I still don’t think I managed to capture what Tragic Romance is/was all about – I may never know.