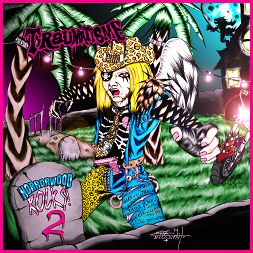 Production:
Recorded and mixed by Divine.

Review:
France’s glam-rock pirate is back with his new ‘monsterpiece’, proving once again that not everyone should pursue their musical dreams. I have to give Traumatisme credit for perseverance, as he submitted his latest CD for review after the trashing his previous effort received. Sadly that’s as much credit as I can give him, as the music on Horrorwood Rocks! 2 is as bad as I remember.

Sitting through this CD is painful — of course pain is one of the topics this horror influenced glamster embraces, but I don’t think this is what he had in mind. The biggest problem is that Traumatisme can’t sing — if he is in fact a glam-rock pirate I would say he has swallowed too much sea water during his voyages. And more importantly, why hasn’t someone raped and pillaged this monstrosity… or at least burned down his studio?

Musically Horrorwood Rocks! 2 is better than the debut, but once again the vocals completely kill everything — I wonder if he has thought about hiring someone else to bring his horrific creations to life? It might not be a bad idea because as it is, this is both horrible and horrifying. Even the image, a cross between Slave Raider‘s Chainsaw Caine and Bozo The Clown, is ludicrous — yet I can respect the outrageousness of his attire. His music could be regarded as outrageous too, but is so unlistenable it doesn’t matter.

Adding Undercover Slut‘s Divine to the album may be an attempt to add some credibility to it, but fails miserably. Sometimes, like a B-movie, things are so bad that they develop a low-budget charm — and sometimes things are so bad that they are simply BAD. Horrorwood Rocks! 2 is bad, bad, bad. Dracula had to be staked in the heart, The Wolf Man had to be shot with a silver bullet, and Traumatisme needs to be drowned at sea.