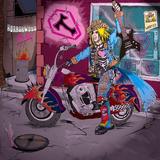 Production:
Produced by Traumatisme and Divine.

Review:
Ahoy matey’s, welcome to the turbulent seas of a glam pirate! In hindsight I realize that some of the hair metal bands I like looked pretty ridiculous back in the day, so I’m not really in a position to be critical of what this self-described ‘blondie zombie rocker’s attire is, but it’s such a weird look it can’t go unmentioned. If there is such a thing as a glam pirate I suppose this guy is it, but it’s gone wrong. Of course what is more important is the music, but alas that’s gone horribly wrong as well.

Horrorwood Rocks! is the debut CD from a French dude who goes under the moniker Traumatisme and it sure sounds a bit like a horror story. It’s hard to describe what this is, I guess it’s glam punk rock mixed with campy horror influenced lyrics like that of Wednesday 13.

After one listen through this mess, I am trying hard to find anything good to say about it at all. So a second spin is required, but unfortunately it seems first impressions can sometimes be right and things don’t get any better, in fact they seem worse. So nope-nadda-zilch, I’m still coming up blank in the compliment department. I decided to torture myself and listen a third time and by now I’m thanking whoever it was that invented the skip button. Maybe some of these songs could verge on being catchy if this bloke could actually sing, but even then I’m clutching at straws.

Along with assaulting my ears with weak nasal sounding vocals, the production is a shambles to boot. The sound fades in and out on some tracks and although the lyrics are in English I can hardly understand most of them, although that only means I am missing out on lyrical gems like “The cops arrived and I had such a fright, because they didn’t find your head, oops!” That’s the problem with some of these one man DIY projects, it makes the music as soulless as the computer used to generate it.

Forget firing the cannons, Traumatisme could destroy (by mass suicide?) any naval opposition simply by cranking up his tunes – ‘Traumatized’ indeed.