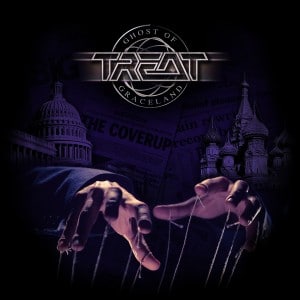 TREAT
GHOST OF GRACELAND
To be released on April 15, 2016 (Frontiers Music Srl)

Review:
Treat was popular in the ’80s, starting in 1985 with Scratch And Bite, as well as four other full album releases between 1986 and 1992. Treat only had minor success in North America but were a hit in their native Sweden. Following many changes to the line-up and a lack of commercial success, Treat finally broke up in 1993. The band reunited in 2006, releasing a new album and touring extensively. Building on the success of their last album Coup de Grace (2010), the band is now releasing “an album packed with reflective, soul searching songs dressed in a devilishly seductive yet hard hitting melodic rock.“

One interesting quote from guitarist Anders Wikström talks about the philosophy behind the record: “We’re middle aged now, I just turned fifty. In our twenties it was all about babes, booze and rock’n’roll. Now we are husbands and fathers with responsibilities. We’ve grown up, just like our fans. I wanted that to reflect in the lyrics.”

Ghost of Graceland is hard to describe. It’s quite modern, but flashes back to everyone from Whitesnake to Nelson.  While the songs do have an element of keyboards, it is a guitar-driven offering more than anything. Sure, there are a few ballads and mid-tempo songs like the inspirational “Do Your Own Stunts” or the pretty “Together Alone.”  Yet the majority of the 12 tracks are decent rockers. “Endangered” is maybe the best example of Treat, with solid guitars and keys that highlight rather than dominate the song.  And “Inferno”, with its gentle intro, hides a Whitesnake like sound and a catchy chorus.

Ghost Of Graceland is a melodic rocker’s treat, if you pardon the pun. It’s a good album with sing-along choruses and neat little hooks, written and performed by old-time rockers that know their style and perform for their fans.