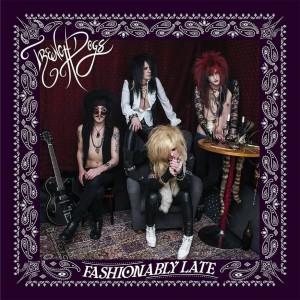 Review:
Sometimes I despair slightly about the lack of glam bands nowadays. Yes, I know I could be like one of the 10 people here in the U.S. that miss Tigertailz, Poison, Ana Black, Hanoi Rocks, the color, the hair, the imagery, and yes, the music too. When you are cruising down Sunset Strip (or any street for that matter), nothing sounds better than those glam anthems cranked to full volume… but I am rambling on… sorry.

So imagine my delight while perusing the web when I came across a picture of the Trench Dogs. Could it be? I see shades of Hanoi Rocks, a glimpse of Faster Pussycat, a nod to Jetboy, a touch of Dogs D’Amour and that’s just from the pictures alone! I contacted the band, purchased a CD and sat back to take in the sounds. So what do I hear you say? What’s it like? Was I transported to the days of hairspray and lipstick? Well, yes and no.

While not the OTT glam rock of say Poison or the colorful bombast of Tigertailz or even the sugary pop of Heartthrob Mob, what we do get is much what I described in my photo assessment. There are touches of Hanoi Rocks, a bit of Dogs D’Amour and some Faster Pussycat and I will say they may be taking over for their fellow countrymen who have called it quits — Vains of Jenna. Vocalist Andy H sounds like a cross between Lizzy DeVine and Taime Downe. Musically, they nail the aforementioned bands with a bit of their own Trench Dogs strut (more on this later). Being only a four song demo EP, it is a bit short and I am craving for more.

With the exception of one song, the other three songs are the sleaze rock variety with all the mood and catchiness you could want. The song “Ode To Ashes” is a ballad with a more different take on emotions, instead of the sappy “Baby, I love you” type we may be used to. Even mid song, a different vocal shows itself to give more credence to the lyrics/story. Which brings me to another viewpoint. Like the ballad being a bit different, all the songs have a bit of a quirkiness (the aforementioned strut) which provides a slight difference in what you might expect. The Trench Dogs‘ Fashionably Late not your typical basic three chord affair. The production is decent and all instruments come through okay, if anything maybe a bit subdued. Case in point, if you listen closely, bassist Li Sick plays some interesting runs, keeping the groove and keeping your attention too.

Reviewed by Will “Bones” Lee for Sleaze Roxx, September 2015

Trench Dogs – Self Sabotage Video made by Tobias Don Rydsheim.