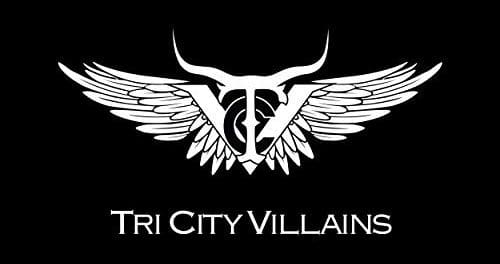 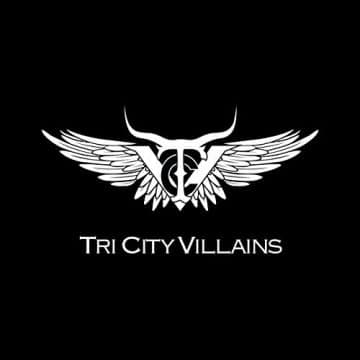 Review:
The funny thing about Tri City Villains‘ self-titled album is that after hearing the record via Tri City Villains‘ website back in March 2017, I decided to go check the Canadian east coast based band out live in the middle of the day during a weekday during their first trip to the province of Ontario and quite literally was blown away — in a great way — by the group’s live performance. I made sure to purchase a hard copy of the band’s self-titled album. However, it became quickly apparent that the album did not quite capture the magic of Tri City Villains‘ live performance of their songs. Part of it has to do with the unfortunately subpar production and part of it has to do with the four weaker songs at the end of the record.

As it turns out, Tri City Villains played five of the first six songs of their album when I got to see them play live and that explains a lot when I listen to the band’s self-titled release. Putting aside the rough around the edges production, the first six tracks on the album are really good but the record loses momentum in a big way during the last four tracks. I kind of wish that Tri City Villains would have taken a page from The Wild! and simply only released their very best songs on a shorter EP. The Wild!‘s debut GxDxWxB EP only contained seven songs but they were all very good landing the record at #2 on Sleaze Roxx’s Top Ten Albums of 2015. Had Tri City Villains followed suit and limited their debut album to those six first songs, I would be touting their album as a fantastic debut. Unfortunately, I have to judge the EP as a whole and those last four songs are simply not at the same caliber as the first six tracks. Perhaps Tri City Villains feel the same way to a certain degree given that they did not play any of their last four songs when I saw them live back in March 2017.

I’ll start off with the good, if not great, part of Tri City Villains‘ self-titled album, which is the first six tracks. After some rather annoying sounds reminiscent of someone trying to find the right channel on a radio while using a turning type knob, you’re greeted with a simple yet strong guitar riff that kicks off the opening track “Brick In The Face.” Add the gritty vocals of either Steve Cole or Jay Corkum (both handle lead vocals but I’m not sure for which songs), with some strong backing vocals, and you have one heck of a song. The track is a mid tempo one but works really well with the extended guitar solo being possibly the highlight. “Cardfall” is another track that starts with a good guitar riff and which will likely prompt you to sing along when the backing vocals kick in. I love the drum fills throughout the song and when the track takes an about turn towards the end with an almost new start to it, which builds into a frenzied guitar solo to end it. “Rock City Love” is pure classic rock with a little bit of grit thrown in. “Waste Your Night” is probably one of the fastest rockers on the Tri City Villains album and is at times slowed down by the main guitar riff, which is an interesting contrast as usually for most songs, the guitar riff quickens the pace over the slowed down verses.

“Stuck All Over You” would have to qualify as a ballad, albeit a faster paced moody one, which I really enjoy and in particular the once again extended guitar solo. It’s not the blistering fast “cram as many notes as you can” type guitar solo but the type where feel and melody are its hallmarks. “Painkillers & Rum” is an alright track. It’s nothing fancy and a pretty straightforward rocker. “Lines” is next and the start of the Tri City Villains album falling off the rails a little bit. It’s another faster paced type ballad with some country like tinges to it. Not my cup of tea. “It’s Hard” slows things down to a crawl with its beginning. It’s a bluesy number at first then turns into an all out rocker built on a solid guitar riff. For some reason, it reminds me of old school Twisted Sister before those guys landed their record deal for Under The Blade. “Find Your Dreams” is the slowest track on the album and should have been left off the record. It definitely changes the pace with its presumably acoustic guitar and piano. “Rip N’ Tear” should not be mistaken for the L.A. Guns classic because it does not measure in that regard. After some distortion sound, the song takes you back to familiar territory in terms of the first six songs on the album. It’s the best of the last four songs.

Unfortunately, the production really leaves to be desired on the album. I suspect that financial constraints may have had a large part to do with it. The album does have a real live feel to it though with the drums, bass lines and guitar being quite prominent in a live type way. I am usually not one for bands re-recording and re-releasing their songs but I would love to hear what Tri City Villains could do with their first six songs on their album with way better and slicker production. At the end of the day, despite the rough around the edges production, I have been playing Tri City Villains‘ self-titled record on a regular basis ever since I acquired it almost five months ago. Considering the large amount of music that the Sleaze Roxx headquarters receives, that speaks volumes in itself on the quality of Tri City Villains‘ songs.