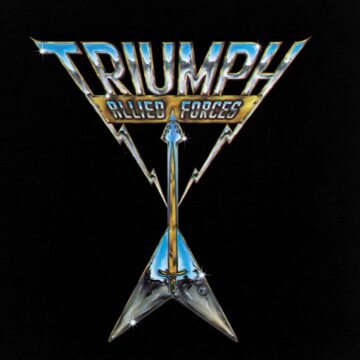 Review:
Fall of 1981 — a very odd, awkward time in my life. That time and space between years existing as a dumb kid, mind filled with little else than school, cartoons, and hanging with the other kids in the neighborhood and those first waves of being intensely mindful of things like girls, impressions, and in turn everything from how my hair and my clothes looked. Now many would also lump in concern about what music to dive in to based on surroundings but from day one, music is perhaps the thing I’ve never let anyone elses’ opinion influence. Adding to the confusion was the fact that, after years of living as a military dependent, I, at least had something in common with. We had just arrived after my dad’s retirement in Atlanta landing in the middle of an unfamiliar civilian life topped off with a school full of well-off preppy kids who for the most part indulged in either the most overplayed rock songs or the most off the wall New Wave tunes. All cool by me but for someone with a long-running library of favorite records, it all seemed a bit stifling and the fact that I was elsewhere (and at time everywhere) musically made me not just the new kid in school, but a very uncool one. As an only child, I didn’t really have anyone else to lean on who might understand. My parents? Yeah, it was all new to them too but what did they know about what seemed like a kid landing on a new planet? Luckily, I had my own sibling – rock and roll – and an only child’s inner imagination.

With the ceiling fan the only thing visible from the faint red light of my boombox’ radio dial, I ended each day on a makeshift cot daydreaming as the the sounds of Atlanta’s WKLS 96Rock poured into my huge headphones. My first ever experience with a non-Top 40 station was a lifeline in what seemed an otherwise humdrum existence and the sounds had my heart pounding a mix of the rock and roll of the day and recent past. Journey and Ozzy Osbourne and others were there to represent what was, while newcomers like Joan Jett and Loverboy introduced the anthems of rock’s future. It was such a music-filled eve, while trying to clear a mind flooded with confusion, that I heard it for the first time. It was a sound so friendly familiar yet obviously one that had never before set rhythm on my ears. In less then a handful of minutes, I lay in silence next to a muted radio eyes wet with an emotional revelation that in some place and time, there were others like myself that lived day by day, hearts completely wrapped in the radio and the rollercoaster of rock and roll.

For many like myself, music can possess a sort of “Magic Power” and for a kid in 1981 in a new place, that song by Canadian rockers Triumph was just a piece of the radio puzzle that would get me through the following year. While on first listen, the album which contains that tune, Allied Forces comes off like a rock and roll battle cry, in many ways, it is just as much a rally cry for life and the deliverance of music as survival through those uncertain times. Over the half decade leading up to its release, I had become a fan of Triumph. With the release of Allied Forces I was fully invested in this Canadian rock and roll trio often thought of as a poor man’s Rush. While few will ever argue the technical legend that is Rush, I feel it necessary to mention that pound for pound, Triumph was every bit as capable with a lyrical ability far more easier for the average fan to relate to. This was never more purposely obvious than on Allied Forces.

Loaded with full band-written compositions and a pair of well-placed instrumentals, 1981’s Allied Forces is pounding melodic rock package that delivers far more than a mere 38 minutes and 50 seconds should. Along the way, Triumph blast through their best boogie woogie grooves, kick it up at times with over the top rock and roll, and just for a breath or two, weave in beautiful melodies. In some ways, if you think hard enough you can almost consider Allied Forces as bordering on the edge of sort of concept. The album is that complete. Matter of fact, when hyping myself up to write this review, I opted not to pull out the CD or record, instead choosing to dump a single straight file of the entire album on a drive to blast in my car making it impossible to skip tracks but if I am to be truly honest, Allied Forces is just that perfect of an “unskippable” record.

Kicking off with the first of two tunes featuring drummer Gil Moore on the mic, Allied Forces powers out of the starting gates with the bluesy hard rocker “Fool For Your Love,” a track that would bring a sweaty beer-soaked smile to fans of classic ’70s rockers like Montrose, Foghat and even fellow Canucks April Wine. Sure Canada’s second fave rock trio held their own a couple of year’s later on stage with heavy-hitters like Judas Priest, Scorpions, Ozzy, and Mötley Crüe at the 1983 US Festival but there’s no denying that Triumph have always been more rock and roll than hair metal, glam rock, or whatever ’80s genre tag you might want to use. “Fool For Your Love” is not only pure Triumph rock and roll, it remains just as powerful as any hard rock tune of the day.

While the start of the ’80s was filled with change that at times was pretty confusing especially for teen fans of hard rock, what at the time hadn’t changed was a love for the radio waves. Great music of every genre could be found with every twist of the dial and hard rock was just beginning to make a move to elbow its way onto the charts. To put it mildly, the ’80s was a great time for radio and Triumph‘s classic “Magic Power” was a great expression of the power of radio at the time. There have been many songs over the years devoted to the emotional idea of radio but few that deliver the same level of visual as “Magic Power.” No wonder that decades later, it still moves fans just seconds into the opening picked guitar. For fans like myself, this is where Triumph held an edge over Rush – through common honest lyrics that even the most average of Joe’s can grab hold of and hold close. Packed with empassioned vocals courtesy of guitarist Rik Emmett, “Magic Power” is that coming of age tale to Triumph fans what perhaps “Sister Christian” is to Night Ranger fans only more clearly stated.

About the time the warm and fuzzies grab hold Triumph kicks things back into gear with the bassist Mike Levine-penned intro “Air Raid” before blistering into the title track a tad over a minute later. If you’re not compelled to pump a fist in the air to this rollicking rock and roll anthem bolstered along once again by Moore‘s raw yet pushy vocals then you just might be too old for rock and roll. Man, the first time I heard this one I just felt all of the things I had always loved about Triumph‘s more energetic tunes including a desire to just want to be buried in a crowd of fellow rockers going crazy. In that respect, Triumph doesn’t stop there. “Hot Time (In This City Tonight)” is even more Triumph rock and roll that comes off like ’70s Ted Nugent bitch slapping a Chuck Berry tune complete with plenty of air-guitar inducing moments. Forty years later, even my 51 year old self is as enticed into attempting every bit of air-guitar madness as my 15 year old self was back in ’81. Writing this even brings goosebumps.

Released as the album’s third single (after the title tune and “Magic Power”), “Fight The Good Fight” is a wonderful melodic rock track that carries the listener along on an uplifting ride as it builds to a powerful climax again showcasing Triumph‘s ability to bring real world messages to the rock masses. It delivers the message without coming off overly pretentious and works perfectly into next track “Ordinary Man”, yet another melodic rock song that delivers to the human spirit, mind, body and soul, the latter perhaps swinging closest to the most mainstream of Rush offerings.

Before closing things out, Emmett offers up beautiful instrumental “Petite Etude” that while on its own might not interest the average rocker, as a door opener to final track “Say Goodbye”, it is perfectly placed. No one will ever argue the guitarist’s musical talent and here he offers up just enough of a minute and a half of acoustic dexterity capable of making even the late, great Edward Van Halen take notice. It not only sets the tone perfectly to finish things up, it sets the plate for Triumph to deliver a final track that gives a hint of what fans will come to hear on the following year’s Never Surrender album and beyond. “Say Goodbye” is not only aptly titled as an album closer, but in some ways offers a farewell to the band’s more raw rock and roll history while introducing what will become a more polished AOR melodic rock version of Triumph in the years to follow.

Fall of 1981 — a year already ripe with great rock and roll and sitting alongside now classic melodic rock releases by the likes of Def Leppard (High ‘n’ Dry), Journey (Escape), and even fellow countrymen April Wine (Nature of The Beast), Allied Forces arrived to place Triumph right smack in the middle of rock’s fight to be recognized as just as a viable musical offering as any other genre powering over the radio airwaves. In mere months, the top of the charts would be bullied by long-haired, guitar-wielding rockers long-awaiting to “Fight The Good Fight” in the name of rock and roll and Triumph not only volunteered to do their part, with Allied Forces they strove to help lead the charge. Funny how in 2021 few things have changed, yet thankfully, neither has the uplifting nature of the music.

The world is full of compromise, the infinite red tape
But the music’s got the magic, it’s your one chance for escape
So turn me on – turn me up – it’s your turn to dream
A little magic power makes it better than it seems