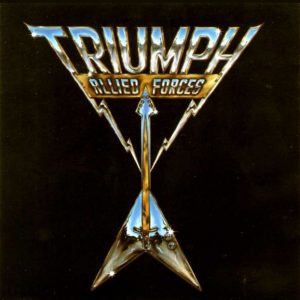 Review:
Dateline 1981 — what a fantastic year of new releases for me… Let’s see, Van Halen with Fair Warning, AC/DC with For Those About To Rock, Judas Priest with Point Of Entry, Rush with Moving Pictures. 1981 was the year also I got Def Leppard‘s High ‘n’ Dry and also the year I became a big fan boy of Iron Maiden (even to this day, minus the Blaze Bayley years) with Killers… Sure, I’m missing some albums but man I could go on and on. One album that came out when I was entering grade nine (yikes!) was Triumph‘s Allied Forces. I mean great marketing move geared to us young rockers. Think about it! Black album cover with a blue and gold Flying V on the cover. Let’s see that means one thing to me — lots of guitar! I knew of Triumph as they played in Thunder Bay [Ontario, Canada] in 1980, which was the last time they were here. But now, it was 1981 and there was tons of great music out.

I remember seeing this at the record shop and once I flipped it over and saw the song titles, I had to get it and all these years later, I still say it’s their best work — front to back no filler…..

“Fool For Your Love” — Kicks off the album and after the first chorus, I’m hooked. Wow! Can this band play and Rik lays down some solid riffs, Gil sings lead and pounds the drums and Mike lays down some straight ahead bottom end. I think it’s their best tune to ever lead off any Triumph album…

“Magic Power” — Some nice little keyboard action and hey — they got a second singer in Rik also doing double duty as guitar hero as well. This was a single for them and did quite well for them. A nice little rocker especially when the solo kicks in…

“Air Raid” —  I’m feeling something brewing at Triumph‘s war base. Sounds like an air raid siren. Hey man, Triumph were not fooling around with that title… The bomb drops, strikes and we head for cover until the… see below…

“Allied Forces” — Rock troops are on the move… Gil and the boys are gonna save our asses! This is a tour de force and check out Rik taking his guitar playing into the next stratosphere. This song just smokes. Sure the lyrics might be a little fruit loopish in 2016 but hey, get behind the Triumph tank as they will blast their way out of danger!

“Hot Time (In This City Tonight)” — It’s a Rik n’ Roll rocker! Basically, it’s Triumph saying “We’re showing up to your city. You better lock your doors ’cause Mike Levine is on the loose!”

“Fight The Good Fight” — Rik starts off side two with a pretty cool track and for all of you that follow Triumph, if you had to throw down a top 10 Triumph list, I betcha 98% of you’s would have this track on it. Once again, the song builds up and Rik just takes it over in the guitar hero department.

“Ordinary Man” — Is Rush hanging out with Triumph? This is concept Triumph — well to my ears anyways… It’s Rik singing and telling us just cause Triumph and the rock troops destroyed your village! We are still ordinary men.

“Petite Étude” — Rik shows us his diversity as a guitar hero. Holy crap! The dude can play all styles.

“Say Goodbye” — Adios everyone. Some pretty cool Hammond organ during the chorus and Rik, Gil and Mike finish off the album in style… Say goodbye… Take a bow Triumph! You earned it!