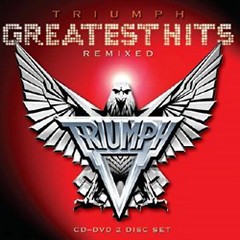 Review:
I first discovered Triumph back in 1986 when they released their album Sport Of Kings and I anxiously awaited the follow-up Surveillance. During my wait I worked my way backward into the band’s back catalog and I remember that time like it was yesterday. Now they have issued their career retrospective Greatest Hits Remixed which is sure to take you down memory lane — reliving the times listening to their music.

Overshadowed by their fellow Canucks Rush, Triumph have at times been referred to as the ‘other three piece Canadian rock band’, which is unfair as they are a solid unit in their own right. Triumph are a balanced mix of hard rock and melodic rock, the band that merged hard rock and ‘corporate’ rock of the ’80s.

Rik Emmett and company have put together a solid career defining CD featuring 13 fan favorites with a newly recorded cover of Nazareth‘s “Love Hurts”. That song is the lead-off track being released to radio to reintroduce the band to audiences. You can’t go wrong with tracks like “Allied Forces”, “Lay It On The Line”, “When The Lights Go Down”, “Spellbound” and “Rock & Roll Machine” — the classics you’ll likely hear in the set list even to this day. The Greatest Hits Remixed collection doesn’t end with the CD though, it also includes a DVD with the band’s video clips — some of which have rarely been seen. The DVD is the icing on the cake and it rounds out this already strong greatest hits package.

Greatest Hits Remixed is great for the diehard fan and even better for the casual fan who’d like to sample Triumph‘s vast body of work.