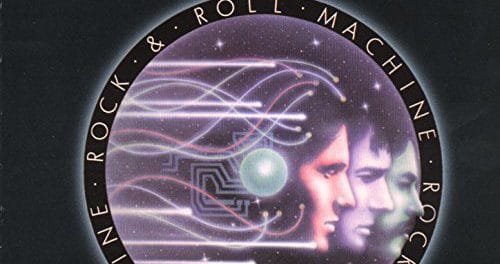 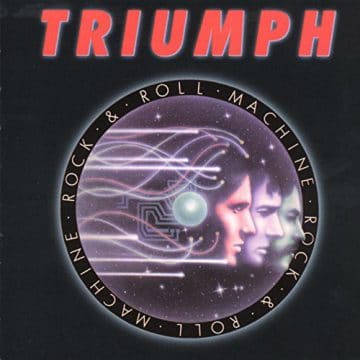 Review:
Thought of by many as a poor man’s Rush, Canadian rock power trio Triumph possessed every bit the talent and perhaps had a bit more in the tank when it came to songwriting. Where Rush may have leaned heavily on musicianship and prog-like lyrics even to the point of delving into fantasy, Triumph could more then hold their own musically and vocally while carving out a more mainstream, rock and roll blue collar direction.

It was with this incredible mix of rock power, melody, vocals, and true to life (and often inspirational) lyrics that Triumph took their solid live show to the masses in support of popular albums like Just A Game and Allied Forces winning over audiences across mainly North America. But before the release of the band’s second album, 1977’s Rock & Roll Machine, guitarist / vocalist Rik Emmett, drummer/vocalist Gil Moore, and bassist / keyboard player Michael Levine were but a trio of Canadian music vets with a single independent label release under their belts. With the 1977 release of the follow-up, Triumph jumped to major label status and quickly became a touring favorite.

Recorded late summer / early fall of 1977 and produced by Levine and Doug Hill, the original Canada-only release of Rock & Roll Machine continues to be a favorite within fan circles if anything for the punch of the original mix and the inclusion of tracks not found on the international version released shortly after on RCA Records. While it can be said that the international edition, featuring a mix of tracks from both the Canadian version and the band’s self-titled debut released just the previous year, makes for a more driving, rocking record overall, one has to wonder if perhaps RCA Records thought that taking a Canadian rock band worldwide with an album featuring several references to America might have been counterproductive to helping Triumph create their own identity. Luckily for Triumph, the label stopped short of leaving a cover of Joe Walsh’s “Rocky Mountain Way” off the release giving the band their first hit single and first crack at what would eventually become worldwide success.

Looking back in time, I can say that while Allied Forces played a heavy role in helping me transition from life as a military dependent surrounded by a multitude of cultures to a more segregated segment of society in the suburbs of white Atlanta, Rock & Roll Machine provided one of my earliest opportunities to explore more serious rock and roll while still being moved to raise a fist. Even the slightly more sedate original version has its pulsing moments of driving rock and roll that in the mid-’70s just begged for the unbridled adulation of adolescent air guitar.

While the addition of “24 Hours A Day” to the international version adds a ton of kick to side two of the original vinyl release in comparison to the over nine minutes of schizophrenic electric and Spanish guitar in Emmett’s musical medley “The City: War March / El Duende Agonizante / Minstrel’s Lament”, there is still plenty of aggression and musical interplay presented for the biggest fan of ’70s rock to be satisfied. Perhaps the fact that the track veers dangerously close to Rush territory could have had a hand in its removal from the re-release. I will say that personally, having enjoyed both versions, I always found it funny that RCA chose to replace side one’s original closing tracks “New York City Streets Part 1” and “New York City Streets Part 2” with another pair of companion tracks from the band’s debut in “Street Fighter” and “Street Fighter (Reprise)” especially when considering the similarities of the tracks — one containing a bit more swing, the other more doses of straight ahead power.

Aside from that, the only other major change between the original Canadian release and the international version is the switch of “Rocky Mountain Way” from the middle of side two to centerpiece of side one. This move has been debated as either to benefit the musical flow due to the change in songs or to bring it in sooner on the album in order to grab listeners while their attention is fresh. Either way it works and for fans, the changes make for different ways of listening to a cool rock band with different ways of creating. What remains consistent on both versions are great opening tracks “Takes Time” and “Bringing it on Home” and the rocking closing title track.

After a pretty rocking debut, Triumph initially attempt to flex their musical muscles handling the majority of the writing in addition to a piece of the production which would become the norm with Levine taking part in producing each release either solo, with a co-producer, or with the rest of the band. The immediate result is an album that continued Triumph’s growth from their debut and whether the decision to change things up on the international release was the best decision or not, the rest of the world’s introduction to Triumph consisted of a mix of the more rocking tunes from the band short history to that point.

But on November 3rd, 1977 the world had yet to know what rock fans in the Great White North were about to find out…
.… that Triumph were destined to be not just another rock and roll trio out of Canada, but one hell of a “Rock & Roll Machine”!

Triumph performing “Rock & Roll Machine” live at US Festival in San Bernardino, California, USA on May 29, 1993: