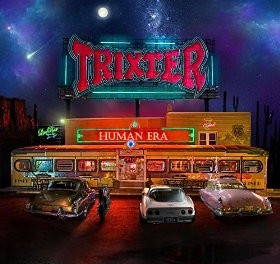 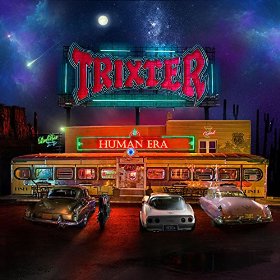 Review:
Talk about nostalgia for the late 80’s and early 90’s! Trixter’s new effort is like being in a time machine. No other record in recent memory has brought so many memories from those days back to me, especially because at the time I simply loved Bon Jovi and thought they could never do any wrong. Boy, was I wrong about that.

But here comes Trixter to the rescue more than two decades later with Human Era.  After barely a couple of listens, I found myself singing along and thinking how wonderful these songs must be to experience live. I must come clean right now and say that this is my first CD from them, I know… it’s not right and something that I plan to correct very soon, but I just never came across one of Trixter‘s records before.

From the start of the record with the great “Rockin’ To The Edge Of The Night”, you know what you’re in for. “Crash That Party” continues… well, the party and things never slow down from there. All songs are memorable but I can easily name a few favorites, besides the first one, like “Good Times Now”, “All Night Long”, “Soul of a Lovin’ Man” and the title track, the latter of which is one of the greatest songs off Human Era.

I love the melodic rock scene we have today. You have great releases from old bands making a comeback such as Trixter and new ones alike. There has never been a better time for being a hard rock enthusiast. I must also add that I’m particularly keen on releases from Frontiers Records. In my eyes, what Serafino Perugino has done with the bands he has signed and the projects he masterminds is just simply amazing. Anything that comes from Frontier Records gets at least a chance with me and most of it turns out to be good or great.

Fans of Van Halen, Bon Jovi, Motley Crue, Def Leppard and the like — don’t hesitate for a moment with Human Era, as you’ll be more than pleased.