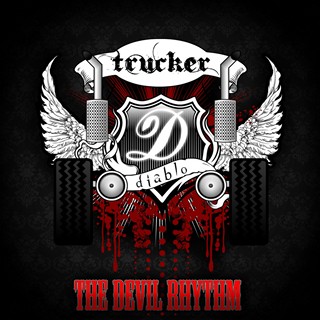 Review:
My first introduction to Trucker Diablo was through the single “Drink Beer, Destroy”. Initially I thought this would end up as a cheesy tongue-in-cheek type of song, but to my surprise and shock this track really takes off and hits you straight between the eyes. The chorus is very catchy and singable, still slightly cheesy, but somehow this band takes the title and makes you believe. You walk away from listening to this Northern Ireland powerhouse act believing in their music.

This is a hard rocking band that takes no prisoners and presents itself as a polished, finely tuned machine. Bands like Buckcherry, Nickelback, and Black Stone Cherry share a similar type of sound, and I’m also hearing some late ’90s Metallica in the mix, as this is a loud album with some great lyrics throughout. Overall I found myself listening to The Devil Rhythm over and over again.

“Juggernaut” is a classic hard party song, an anthem for the rocking masses, while “Voodoo” is a southern rock cannon shot that
explodes in hard edged shrapnel. “Big Truck” is another favorite of mine, as well as “Dirty Love”. “When Angels Die” is a killer tune and one of the best on the album. Trucker Diablo prove to be a classic southern rock party anthem band with metal and hard rock overtones — when these guys plug in and get ready to play you better believe they are going to rock that stage. And a guest appearance by Ricky Warwick, current lead singer for Thin Lizzy, has helped push this band to the forefront of their genre.

Trucker Diablo even have a song on a downloadable version of the XBox video game Rock Band — how metal is that? Originally released independently back in 2010, this Ripple Music version comes with three bonus tracks (two as a download only), and I say… get this album now! Hopefully Trucker Diablo will be touring near us soon, and if they do, get your ticket, grab a beer and prepare to get destroyed by the ‘Devil Rhythms’ of Trucker Diablo.