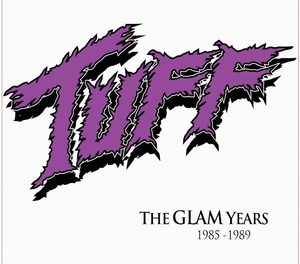 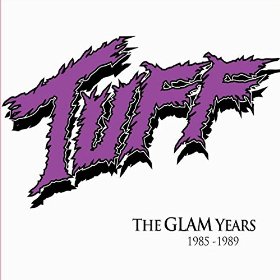 Review:
If you are looking for some songs that will take you back to the glam years of the Sunset Strip, look no further than Tuff‘s The Glam Years, which will definitely provide the retro trip back to that era. Whether you want to revisit that era is another question in itself. Whatever the case, The Glam Years is really just a fun album which songs definitely feel like they originated in the mid to late ’80s.

The first six tracks on The Glam Years feature singer Jim Gillette who was going by the moniker of Jimmy L’Mour during that time period and who was probably the first singer of note for the glam metal band. Although Gillette went on to front the band Nitro, I know him more for having married the iconic Lita Ford and later for the rather sad at times public feud that he and Ford engaged in over their divorce and child custody battles. The last seven tracks on The Glam Years feature lead vocalist Stevie Rachelle who is most likely the singer that most people associate Tuff with. Again, I am more familiar with Rachelle for his tenure as the website Metal Sludge‘s editor and owner. Tuff are one of those bands that I was really was not aware of back in the ’80s and that I for the most part overlooked in the early ’90s even though they were by that time signed to a major label. In any case, it certainly is a lot of fun to discover their early material via The Glam Years.

Not surprisingly, the tracks featuring Gillette have a real early Poison feel to them and based on the comments from bassist Todd “Chase” Chiasson in the CD booklet for The Glam Years, it seems that Poison would have had a big influence on Tuff back in the day. The material with Rachelle on lead vocals is more polished with better production and heavier due to the singer’s grittier voice and some heavier guitar licks. Overall, the songs on The Glam Years are really hit and miss, and that is not surprising since the band had yet to be signed at that time and most of the tracks apparently did not end up on Tuff‘s debut album What Comes Around Goes Around for Atlantic.

My favorite tracks on The Glam Years from the Gillette era are “Glamour Girls”, “Forever Yours” and the very early Poison like “Candy Coated.” The one track that I really dislike is “Ooh-Ahh” — it really represents everything that was wrong with the ’80s with heavy keyboards and a cheesy chorus. From the Rachelle era, my favorite tracks are “Round ‘Em Up”, “Want Trouble – You Got It” which reminds me a lot of Canadian sleaze rockers Reverse Grip — but that should really be the other way around, and “Forever Yours” (again!).

Overall, The Glam Years will never win album of the year for 2015 but it certainly is a fun trip down memory lane — and at the end of the day, that is most likely what Rachelle, the driving force behind Tuff, had in mind — and it should be a must own for any Tuff diehard.