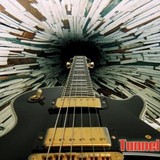 Review:
What is a musician to do when his current band is on hiatus? In the case of former King Kobra guitarist Dave Henzerling, whose tongue-in-cheek band Big Cock is sidelined while vocalist Robert Mason fronts Warrant, you pick up right where you left off. If you were a fan on Big Cock you’ll love Tunnel too because the only difference is the lack of bathroom humor in the lyrics, it’s as simple as that!

When singer Scott Hammons, who Henzerling met when the two toured with Icon, opens “Sound Of Thunder” with a scream you swear it is Mason himself at the microphone. And that is precisely why this CD works so well, because Hammons and Henzerling play off each other with the same precision as the guitarist has with his Big Cock bandmate. While Big Cock was limited in how seriously they would be taken due to their moniker and lyrical content, Tunnel has none of those restrictions.

With Tunnel the music really can speak for itself, as there are no preconceived notions about this musical pairing (Collective Soul drummer Ryan Hoyle helped the duo out in the studio). And the music speaks volumes on a few of these tracks, such as the aforementioned “Sound Of Thunder”, “Blood On The Highway”, the Lynch Mob sounding “In Your Groove” and the absolutely blistering “American Metal”. On “American Metal” especially this duo create perfection, as the vocal wails and chugging guitar riffs meld to create their crowning achievement.

Just like Big Cock, Tunnel isn’t afraid to venture away from the typical melodic rock fare either. “Into The Sun” would be considered the band’s ballad while “The Balcony” is an acoustic number that sadly never seems to get off the ground.

Tunnel is essentially Big Cock with different players and a lack of songs about sex, other than that the feeling and musicianship is the same – top notch!