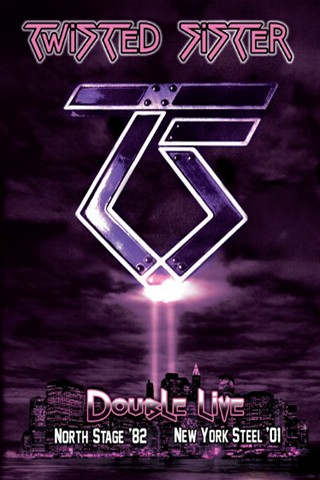 Review:
Hot on the heels of the Twisted Sister reissues by Armoury Records — including the stellar deluxe edition of the debut Under The Blade and the classic You Can’t Stop Rock ‘N’ Roll’ — comes the band’s new DVD Double Live.

Eagle Rock Entertainment have raided the Twisted Sister archives with the band’s full cooperation and has unearthed the band’s 1982 North Stage Theater concert. Obviously, visually this recording won’t compare to today’s standards, but the footage is of great historic significance as it captures Twisted Sister playing a final club gig in New Jersey before hopping on a plane and heading across the pond to record their debut album Under The Blade. The ‘North Stage’ concert showcases Dee Snider and the guys primed and ready — they certainly weren’t green by any means. Hits like “Shoot ‘Em Down”, “Destroyer”, “Under The Blade”, and “You Can’t Stop Rock ‘N’ Roll” are included alongside Twisted Sister cuts that have long been retired from the band’s live shows.

In the weeks following the 9/11 terrorist attacks, America pulled together to help in any way possible. New York radio/television personality Eddie Trunk started to put together a fundraising concert to benefit the families of the firefighters and police officers who lost their lives at the World Trade Center. Trunk reached out to Twisted Sister and was instrumental in reuniting the band after 14 years (at that time), and resulting in the second disc of Double Live. Twisted Sister came out without the glam, the make-up, and played a no-frills 13 hit set that closed the New York Steel benefit show and stole the show — and rightly so, as they played with the angst and urgency of a band slugging it out in the clubs.

There’s interview footage included on Double Live that neither makes nor detracts from this collection — the meat of this package is clearly the live performances. Double Live is essential to anyone who considers themselves a true ’80s hard rock and heavy metal fan.