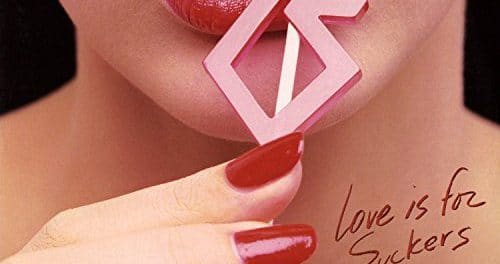 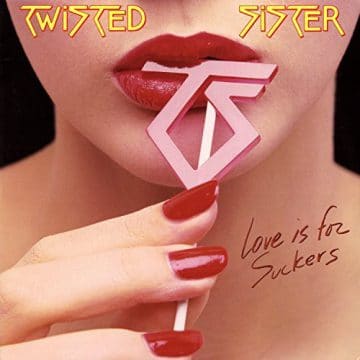 TWISTED SISTER
LOVE IS FOR SUCKERS
Released on August 13, 1987 (Atlantic)

Review:
You’d think that Twisted Sister would have learned their lesson with the commercial flop that Come Out And Play was. Worse yet was that Twisted Sister had converted themselves in a span of a couple of years from an angry heavy metal band into an almost bubble gum type hard rock band with Come Out And Play from the cheesy videos (“Leader Of The Pack” and “Be Chrool To Your School”) to the silly costumes to the almost pop rock like anthems. I don’t blame Twisted Sister for going commercial and essentially “selling out” with Come Out And Play because quite a few heavy metal bands that had experienced some kind of success did so at that time. Mötley Crüe followed up Shout At The Devil with the very commercial sounding Theatre Of Pain (I can still remember how disappointed I was when Theatre Of Pain first came out). Iron Maiden followed up Powerslave with Somewhere In Time, which incorporated guitar synthesizers. Judas Priest‘s next album after Defenders Of The Faith was Turbo, which remains their closest record to “pop” rock. The list goes on.

While most of the aforementioned bands returned to heavier music with their next albums — Mötley Crüe‘s follow up to Theatre Of Pain was Girls, Girls, Girls while Judas Priest followed up Turbo with Ram It Down — Twisted Sister didn’t learn from their mistakes. Perhaps it’s because the other bands somehow did not crash and burn like Twisted Sister did with their more commercial approach. Perhaps it’s because Twisted Sister had already become a bit of a joke with their very entertaining videos for “We’re Not Gonna Take It” and “I Wanna Rock” — and lost whatever credibility they had left with Come Out And Play. Another problem was that we were overexposed to Twisted Sister with Snider battling the PMRC and the aforementioned videos. What Twisted Sister should have done is go back to their roots and deliver an album filled with angry heavy metal anthems like the ones on Under The Blade and You Can’t Stop Rock And Roll. Instead, Twisted Sister delivered more of the same PG material as on Come Out And Play with songs like “Hot Love,” “I’m So Hot For You” and “Me And The Boys.”

As it turns out, Love Is For Suckers was first going to be a Dee Snider solo album. That the record eventually became a Twisted Sister is no real surprise especially considering that Snider was writing pretty much all of the songs by then for the band in any case. The real problem was that Twisted Sister — or essentially Snider — delivered an album full of slickly produced poppier hard rock songs with little to no edge. That being said, I don’t mind the record. It’s got some good catchy songs and only really tails off during the last three songs. The album opener “Wake Up (The Sleeping Giant)” and the title track are really the only tracks with any balls to them and the title track is perhaps the only song that could have made it onto one of the band’s “big three” records — Under The Blade, You Can’t Stop Rock And Roll and Stay Hungry. “Hot Love” is full of great melodies and an easy chorus to get into. “I’m So Hot For You” is on the cheesy side but a good song overall. “Me And The Boys” and “One Bad Habit” are catchy tunes that will have you singing along.

Where Love Is For Suckers sputters is with its three last songs. “I Want This Night (To Last Forever)” is awful stuff and a seems like a blatant attempt at trying to score a hit. The ballad “You Are All That I need” is an emotionless lacklustre one, which couldn’t even carry the jock straps of “The Price.” And what can be said about “Yeah Right?” Yeah right that Twisted Sister would end an album with such a bizarre track. This is the type of song that you release as the “B” side of a single as a throwaway song but not as the album closer for what has turned out to be the last studio album of original material from one of the most amazing live bands.

Sadly, Love Is For Suckers is the album that brought the final nail to the coffin and led to the demise of Twisted Sister. One can only wonder what could have been. What if Twisted Sister would have come back with their heaviest and angriest album ever rather than the slick commercial Love Is For Suckers filled with PG like tunes? Could they have turned the tide around at that time? We’ll never know. Perhaps the saddest thing is that Twisted Sister never righted the ship with a studio album worthy of their “big three” afterwards and the last studio album of original material in the band’s history will always remain the overall disappointing Love Is For Suckers. I will end with the caveat that I still like listening to Love Is For Suckers but it’s a disappointing album when compared to the band’s aforementioned “big three” records.