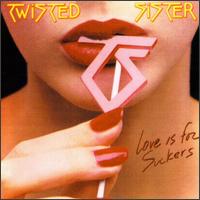 Review:
Twisted Sister is credited as being one of the original and most influential sleaze rock bands ever. But, not all of their records are remembered. Of course, Stay Hungry will always have a place in the annals of metal history with classic cuts like “I Wanna Rock,” “We’re Not Gonna Take It,” and my personal favorite Twisted Sister song ever which is also the title track of that record. But, Love Is For Suckers is not quite as remembered. As a matter of fact, I’m a big “SMF” and even I hadn’t heard the 1987 release until recently. I assumed it was some “swing and a miss” record that would just be a dust collecting jewel case in my CD library… Boy, was I off on that one!

The album opens up with such a cool track. Arnold Schwarzenegger used “We’re Not Gonna Take It” as his campaign theme when he ran (and became) Governor of California and President Bush should use “Wake Up (The Sleeping Giant)” as his campaign theme. It is about being pushed too far and fighting back. Sounds like it fits, doesn’t it?

“Hot Love” is up next. “Hot Love” is the only track off the record I actually heard on the radio a few times. This song is such a cool hair metal track. I can’t help but sing the chorus out loud which is a problem if you are wearing headphones and happen to be in a quiet environment. That’s a good way to see the inside of a padded van, actually.

The title track “Love Is For Suckers” follows next. Another cool song! And, at some point or another, we’ve all felt the things Dee sings about here. Something about this track reminds me of Alice Cooper‘s more up beat 80’s material.

“I’m So Hot For You” and “Tonight” are cool “commercial friendly” songs.

“Me And The Boys” reminds me of a 60’s girl group song such as “Leader Of The Pack” with a lot more guitar influence. For that matter, “One Bad Habit” follows suit with that same style. Kiss also did this with “Then She Kissed Me” off the Love Gun album.

“I Want This Night (To Last Forever)” follows with an opening that probably inspired the opening of Warrant‘s “Cherry Pie.” When you talk about classic hair styled metal, you mean this track!

“You Are All That I Need” is a beautiful song. It’s as far “soft” as Twisted Sister will go which isn’t “soft” at all! This is a fantastic song that you can’t help but sing along to.

“Yeah Right” is a song that probably would fit on any of Twisted Sister‘s other records. It’s a cool song to close out!

There is a sad epidemic among metal fans that claims if an album makes you sing along, it’s a no good. They are the ones that make fun of the bands I like and like death metal bands from the Netherlands that eat each other. Bottom line, this record does not deserve the insults it gets by the pretentious “journalists.” What it does deserve is airplay! Lots and lots of air play! Fantastic record that I recommend to all who love hard rock, hair rock, and all points in between!