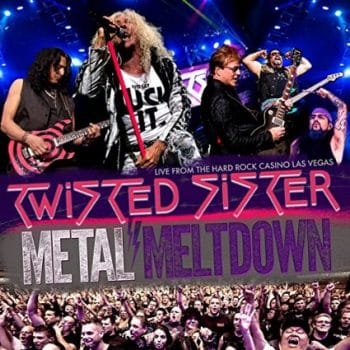 Review:
I was very fortunate to have seen Twisted Sister live in September of 2015. It was the first and only time I had ever seen them live and it was one of the best live performances I have attended. Since this is going to be their final tour and they will not be coming to play anywhere near me for the rest of the tour, I knew I would never be able to re-live that experience ever again. Boy, was I wrong.

Twisted Sister‘s Metal Meltdown was recorded on May 30, 2015 at The Joint located in the Hard Rock Casino in Las Vegas, Nevada, USA. This DVD is the first in a series of four being released by Loud & Proud Records. The other three being released on later dates will be for Extreme, Skid Row and Great White.

This particular concert was dedicated to Twisted Sister‘s legendary drummer A.J. Pero, whose death surprised the music world. After his passing, they recruited Mike Portnoy (Dream Theater, The Winery Dogs, Metal Allegiance, etc) to fill his shoes for their 40 year anniversary tour. Pero actually handpicked Portnoy to fill in for him on the tour in the event he had to miss a show due to illness or some other unforeseen circumstance. Little did he know it would be because of his death that Portnoy would have to take his role in the band.

This great DVD encapsules everything this band is all about — playing their music with passion and attitude. Is every note that Jay Jay French, Eddie Ojeda and Mark Mendoza play or every word Dee Snider sings perfect? Hell no! And I don’t want it that way. It’s a live show and I don’t want any post-production doctoring. I want everything live and raw and that’s what Twisted Sister is all about. It also captures the energy of the band and brought me back to when I saw them live. Like Snider always says, they can hang with any band out there today and they definitely can.

The song selection was excellent as they picked great pieces from all their albums. Everything from their popular hits “We’re Not Gonna Take It” and “I Wanna Rock” to lesser known songs (unless you’re a big fan) such as “I Am (I’m Me)” and “The Beast” were included. Also included is a video of a great drum solo performed by Pero. I also enjoyed the short behind the scene documentary pieces; but for me, I would have rather had them separate from the concert in a bonus section. At least, they are short enough and do not take away from the live experience of the show itself. The only other thing that bothered me was the credits being run during “S.M.F.”, the DVD’s final song. I would have loved to see that song performed on the full screen. All in all, this DVD is a must have in everyone’s concert collection.

Available now! http://lnp.io/29wjqb8Twisted Sister, Metal Meltdown, a concert to honor A.J. Pero, in Las Vegas at the Hard Rock in May 2015! A 3-disc package…

Available now! http://amzn.to/2986uqrTwisted Sister, Metal Meltdown, a concert to honor A.J. Pero, in Las Vegas at the Hard Rock in May 2015! A 3-disc packag…