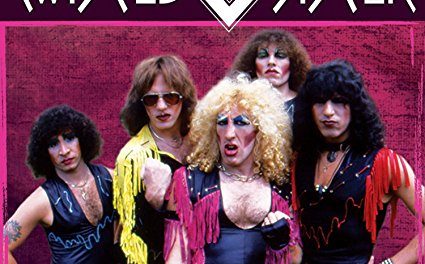 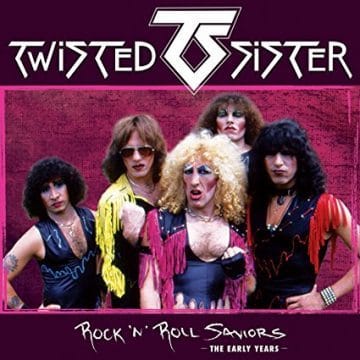 Review:
I have to admit that I was initially disappointed when I received my purchased copy of Twisted Sister‘s Rock ‘N’ Roll Saviors – The Early Years three disc set. Two of the discs seemed to be a rehash of prior released live recordings from the mighty Twisted Sister while I thought that I already had the third disc “Detroit Club” in my collection. This sudden revelation upon receiving my copy of the cool packaged box containing the three discs (and much more) shouldn’t have been a surprise since I had previously posted an article on the three disc box set that listed all the songs featured on the release. Clearly, I forgot about that article!

Rock ‘N’ Roll Saviors – The Early Years three disc set contains three live performances from Twisted Sister from back in the day before the group hit it big with their single “We’re Not Gonna Take It” and their third full-length studio album Stay Hungry. You get a vintage performance from Twisted Sister at the Detroit Club in Port Chester , New York, USA on June 27, 1979 with a few tracks added from a show on May 24, 1980. You get another vintage performance from the group at Hammerheads in Long Island, New York USA on August 8, 1980. Finally, you get the band’s Monsters of Rock Festival debut at Castle Donington in England on August 20, 1983 which was less than two months after the band released the album You Can’t Stop Rock ‘N’ Roll. Sounds great? It definitely would be if it wasn’t that all of these tracks have already been released on similar live albums…

As mentioned earlier, I thought that I had the disc Detroit Club in my collection already. Yes. I do have a live album from Twisted Sister titled Fighting For The Rockers in my collection but it does not seem to have ever been a Twisted Sister sanctioned album. As it turns out, the track lists on both Fighting For The Rockers and the Detroit Club that can be found in the Rock ‘N’ Roll Saviors – The Early Years three disc set are very similar and with good reason. Apparently, the shows were only two days apart as the live recordings on Fighting For The Rockers were recorded on June 29, 1979 while the ones on Detroit Club were recorded two days earlier (except as noted above). At least, the raps from Dee Snider and Jay Jay French to the audience appear to be different (I haven’t directly listened for the comparisons) from one night to the other, which is actually quite impressive. I’ve seen some young bands in the last few years play a couple of shows back to back with the raps between songs being pretty much the same and that is always disappointing since it feels that the band is justifiably or not going through the motions. That is definitely not the case for Twisted Sister. The sound quality is not the greatest on Detroit City but if you do not already have Fighting For The Rockers, it’s fun to discover some older Twisted Sister songs that are not repeatedly showing up on most of the band’s live records.

In terms of the 1980 Hammerheads disc, what a difference a year makes as Twisted Sister had four new songs in their set — “What You Don’t Know (Sure Can Hurt You)”, “Bad Boys (Of Rock ‘N’ Roll)”, “Destroyer” and “You Know I Cry” with the first track becoming really only the second song to be a staple of the band’s live set (after “Under The Blade”) to this day. The sound quality isn’t the greatest on the Hammerheads disc but it seems better than the Donington one! As far as the 1983 Donington live show goes, there is no doubt that the songs have been featured on many prior Twisted Sister live releases. For example, all of the songs from the 1983 Donington live show except two (“We’re Gonna Make It” and “It’s Only Rock ‘N’ Roll”) appear on Twisted Sister‘s Live At Astoria that was released back in 2008.

The one common denominator with all three discs is that you are hearing a hungry, loud and in your face band that appears to pull out all the stops to put on the most memorable show that it possibly can. You can feel the energy exuded by Twisted Sister during each of their live performances and that is truly commendable, especially since the three live performances are spread over four years. What is even more amazing is that even as Twisted Sister play the final dates of their final tour together, they continue to have the reputation as one of the greatest live acts around. Another interesting thing about the three live discs are that there is a different drummer for each live performance with A.J. Pero only figuring on the Donington disc. I can’t say that I notice the difference between one drummer to the other but I wasn’t familiar with the name Ritchie Teeter (who plays on the Hammerheads disc) until now.

I am still on the fence on whether it was worth shelling out $50 for Twisted Sister‘s Rock ‘N’ Roll Saviors – The Early Years three disc set but at least the group provided some nice extras including a very nice box, a vintage backstage pass, some lipstick (my first…) and three cool guitar picks. I think that at the end of the day, Rock ‘N’ Roll Saviors – The Early Years will really only please the diehard Twisted Sister fans.