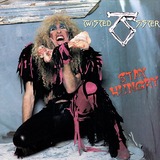 Review:
I’ll never forget the first time my eyes and ears came across Twisted Sister. I was only 11 years old and just started experimenting with metal music. Then one day I saw this band, looking like clowns, on a TV video show and immediately thought ‘WTF is this??’ At that point in time I had seen nothing like Twisted Sister, they were outrageous, even ludicrous, and spewed out anthems to a generation that was dying to rebel and scream ‘I wanna rock’!.

I’ll admit, at first I thought Stay Hungry, with its revolting artwork (it seems rather tame today) and hilarious videos for “We’re Not Gonna Take It” and “I Wanna Rock”, were nothing but a joke. But in 1984 metal was king of the castle, and after watching their videos on a daily basis I slowly became a loyal ‘S.M.F.’ Twenty-five years later Stay Hungry holds up surprisingly well, showing that songs like the title-track, “Burn In Hell”, “The Price” and the infamous singles were much more than just make-up and excess.

If you’re like me you might be a little upset with Twisted Sister though. It was only five years ago that the band re-recorded this classic album and released it as Still Hungry. It almost appears to be a money grab that this album is coming out yet again… but this is the way it should always have been packaged. Finally you get the original CD and an extra disc of bonus material that includes Twisted Sister‘s first new rock song in years.

Seeing as the majority of us already have the songs on Stay Hungry memorized, I’ll concentrate on the bonus tracks. First off, these are demos and they sound like demos, meaning they have a raw sound… so if you’re looking for a huge production you’ll be disappointed. Some of these songs are damn good though, even if they sound more late 70s than mid 80s. “Death From Above” and “Call My Name” for instance chug along with a steady beat and dark riffs while “Prime Motivator” is driven by the bass guitar. “Death Run” finds the band speeding things up, followed by “This One’s For You” with the infamous gang backing vocals. Actually, with a little help, any of these tunes could have fit perfectly on the original album as these demos are better than most band’s finished product!

As for the new track “30”, it rocks. Originally written for the ‘Gone Country’ TV series, there is nothing country about the song now. It wouldn’t have fit very well on Stay Hungry however as it sounds more fitted for Come Out And Play. Either way, it’s a great return for a band that has been earning their wage with Christmas carols.

I’ll forgive Twisted Sister for the Still Hungry fiasco, simply because this collection is so great. This is how Stay Hungry was always meant to be released… and it sure brought back a lot of early metal memories for me.