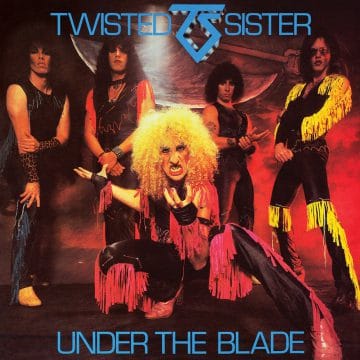 TWISTED SISTER
UNDER THE BLADE
Released on September 18, 1982 (Secret Records)

Review:
The ’80s were filled with now legendary bands who not only dragged themselves through the ’70s to reach legendary status, but also carried themselves forward for years to come outlasting many of their younger ’80s contemporaries. Bands that immediately come to mind include German rockers The Scorpions, who were originally formed in 1965 releasing their debut Lonesome Crow in 1972; England’s Judas Priest, who released their debut album Rocka Rolla in 1974 five years after their formation; and New York rockers Twisted Sister, who despite forming just a few years after their European counterparts in 1972 had to wait a decade before the release of their hard hitting full length debut and hard rock classic Under The Blade. But while the Scorpions and Priest waited for far less time to sign to a label, Twisted Sister came swinging out of the gate with Under The Blade creating an instant underground classic and winning over hardcore UK metal fans eventually prompting major label Atlantic Records to ink them to a deal.

The momentum would result in the release of follow-up classic You Can’t Stop Rock And Roll and international breakthrough album Stay Hungry. This success would lead to Atlantic re-releasing a more polished version of Under The Blade that to this day is considered inferior compared to the original raw Secret Records version. But in 1982, after venturing to the UK and signing to small British label Secret in April, Twisted Sister first released the Ruff Cuts EP and in September, Under The Blade.

Produced by UFO bassist Pete Way in England and featuring a guest appearance by Mötorhead guitarist “Fast” Eddie Clark, Under The Blade set the band up perfectly to be embraced by an English audience living through what will come to be known as the New Wave of British Heavy Metal. Despite somewhat appearing as a low budget New York Dolls / KISS lovechild visually, on their debut, Twisted Sister possess an edge far closer to previously mentioned bands Judas Priest and the Scorpions than their fellow New York bands prompting one reviewer to describe the release as “the most ferocious of the band’s career.” Simply put, despite being called Twisted Sister and looking like wrestlers in drag, the band definitely didn’t sound wimpy. Title track “Under the Blade” — reportedly an ode to a band member’s surgery — is on its own a blistering classic sounding closer to Paul Di’Anno era Iron Maiden than Sister’s New York counterparts.

While the rest of Under the Blade never quite gets that ferocious, songs like “Tear It Loose” (featuring “Fast” Eddie Clarke on the second solo), Shoot ‘Em Down,” “Sin After Sin,” “What You Don’t Know (Sure Can Hurt You)” and anthem “Bad Boys (Of Rock ‘N’ Roll)” possess pure raw rock and roll energy while surrounded by slow grinding tracks such as “Destroyer” and “Day Of the Rocker.” Twister Sister even prove that they can mix it up a bit on the tempo changing “Run For Your Life” — a track that to this day remains a personal favorite along with the heavy title track.

At the end of the day, despite the rawness and heaviness of Under The Blade and the following year’s You Can’t Stop Rock ‘N’ Roll, Twisted Sister will never be mistaken for bands on the NWOBHM scene such as Maiden, Mötorhead or Saxon, and rightly so. Like each of those great bands, this period in Twisted Sister’s history, while heavy and to a degree dark, represents only part of what the band would soon become known for, as the rockers from New York would cash in the chips on a slicker anthem style a la KISS. As history shows, this more mainstream style would not only lead Twisted Sister to worldwide success, but also to their eventual decline from the top of the rock and roll ladder.

But for a brief moment in 1982 and in 1983, Twisted Sister would be as sharp edged as anyone in hard rock and heavy metal thanks to at first, the raw energy of Under The Blade.

Twisted Sister performing “What You Don’t Know (Sure Can Hurt You)” and “Destroyer” on The Tube (Channel 4 UK) in 1982:

Twisted Sister playing live on The Tude (Channel 4 UK); What You Don’t Know (sure Can Hurt You), and Destroyer. Original broadcast video from December 1982.