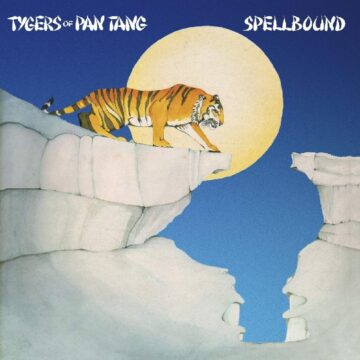 Review:
In 1981, the world of hard rock and heavy metal was being invigorated by a movement called the New Wave of British Heavy Metal (NWOBHM). Leading the charge were Iron Maiden, Def Leppard, and Saxon… but on their heels were a flood of bands drawing on the same well of influences — classic metal with punk-ish energy. This new scene was being nurtured by the metal underground; a network of homespun fanzines and radio programs (as well as more mainstream journals like Kerrang and Sounds) which nurtured and exposed these new groups.

Hailing from Whitley Bay, near Newcastle, in the northeast of England, was Tygers of Pan Tang. The band’s first album Wildcat was released in 1980 by MCA, and found the band as a four-piece with gruff vocalist Jess Cox. The Tygers enlisted esteemed producer Chris Tsangarides for this effort, which caused a splash in the NWOBHM mix. A very nice debut… and a harbinger of better things to come.

For their follow up to the debut, still with major label MCA, the Tygers enlisted hotshot lead guitarist John Sykes (then an unknown, but of course who later found fame with Whitesnake and Thin Lizzy) and replaced Jess Cox with Jon Deverill. Deverill was a much smoother vocalist, almost operatic at times. I believe that, later in life, he performed as an opera singer. Returning members were founder Robb Weir on guitar, “Rocky” Laws on bass, and drummer Brian Dick.

I’ll never forget my first exposure to Spellbound – I was a devout listener to Toronto’s Q107 Midnight Metal Hour, which aired on Friday nights. A fabulous program with host Jeff Chalmers, who really had his ear to the pulse of all that was cool and happening in the exploding world of metal. As guests on one program in 1982, he had Lips and Robb Reiner from Anvil, who were promoting their then-new release Metal On Metal (another fantastic period release). Explaining their use of producer Chris Tsangarides, they referenced Spellbound by the Tygers, describing the album as ‘hitting you like a tank’. They then requested the album lead off track, “Gangland”, and I was completely blown away by the fierce power and musicality of the tune. I was hooked!!

Into the grooves of “Spellbound” – like the best releases, there is not a dud in this collection. Aforementioned opener “Gangland” really sets the tone: Deverill’s voice effortlessly shifting from soar to growl, and Sykes’ lightning lead playing grabbing you by the ears. I still get chills when hearing Deverill snarl “If you mess around with fire, you’re gonna get yourself burned!” The follow up track, “Take It”, is probably my favourite of the bunch. We’re talking serious air guitar material here. A brief instrumental, “Minotaur”, leads into pre-speed metaller “Hellbound” — a tale of duelling jet fighters. The Tygers then slow down for one of two ballads on the album, “Mirror”, a great tune again featuring Jon Deverill’s fantastic vocal range. Onto side two of the old vinyl (yep, still got mine), and “Silver And Gold” is a straight-ahead rocker with a very catchy chorus. Probably the catchiest of the bunch though is “The Story So Far”, featuring a dynamite riff and very memorable refrain. The album closes out with another slower number, “Don’t Stop By”, full of shifting dynamics and another wonderful performance from Deverill. All in all, ten tunes of awesome metal.

Tygers of Pan Tang certainly earned their place in music history with Spellbound but did not crack into the big time. Certainly a lot more polished and professional sounding than a lot of their NWOBHM contemporaries, the band went on to release many more records and is still going today with Robb Weir at the helm. Some of the songs on Spellbound have been covered by current metal bands, ensuring that the tunes still live today. If you can find a copy of Spellbound, I guarantee that, like me, you will be instantly hooked by an incredibly influential group of British bangers.