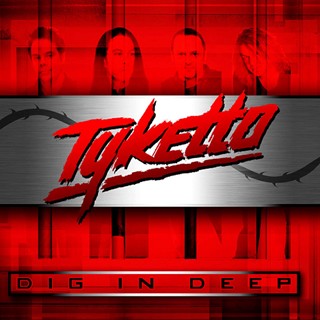 Review:
Sessions for Tyketto‘s reunion album Dig In Deep began way back in 2009 with all original members, despite the various departures and announcement that they would retire the name in 2007. Firstly, I was mightily impressed by the New York band’s performance at Hard Rock Hell in December of 2011 — it was energetic, quality sounding, and youthful… they really did seem ‘forever young’!

Yes, you really did see ‘cello’ and ‘violin’ listed as instruments on Dig In Deep, but fear not — the band have stuck to their roots with this album, but not so rigidly that you feel like you’re stepping back a decade or two. The album explores the typical heavy but uplifting Tyketto sound during the opener “Faithless”, while “Here’s Hoping It Hurts” and “Battle Lines” capture the melodic, softer styles the band are also known for writing so well.

For me, the weakest point throughout Dig In Deep was actually Danny Vaughn‘s vocals, which seemed generally weak in the mix — as well as the harmonized backing vocals which often sounded not quite right. Brooke St. James‘ guitar work is an interesting mix of hard rock riffs and technical fills, but you sometimes get the sense that it doesn’t work all that well as you’re too aware of the many different layers in the mix rather than just appreciating them semi-consciously. I say sometimes because on tracks like “Evaporate” and “Dig In Deep” everything pulls together wonderfully with powerful vocals and a simpler accompaniment. The title track especially echoes sentiments of “Sail Away” — from their 1991 debut — if not as strong a song. Some tracks are easy to skip over if you’re not a dedicated Tyketto-nian, but “Sound Off” might draw you in with its anti-establishment lyrics against no-talent TV shows. The closing number “This Is How We Say Goodbye” has elements of a cheesy ballad for a band breaking up, but it is true to say that Tyketto still carry it off very well.

Buy the album? You know, I’m glad Dig In Deep doesn’t purely re-cover old ground — the musicianship is there, but maybe what has been done by a band in their prime is too good to beat (practically impossible in the case of Don’t Come Easy). For me Dig In Deep just wasn’t enough of a breath of fresh air — but if you can catch them live this year, go for it, as I doubt you’ll be disappointed..