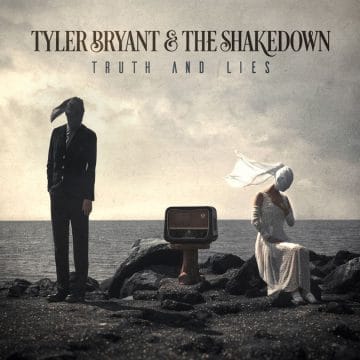 Review:
Truth And Lies is the third album by this foursome based in Nashville, Tennessee. I have to admit this is my first exposure to the band, and I’m quite impressed. According to the band bio, Tyler moved from Texas to Nashville when still a teenager and immediately hooked up with drummer Caleb Crosby, ultimately adding Noah Denney and Graham Whitford… the son of Aerosmith guitarist Brad Whitford.

The 13 track album opens up with a rousing “Shock & Awe.” Surprisingly it isn’t a fast song, but has a great sound and attitude. “You were looking all around for a new obsession, need an answer that will keep you guessing.  Settle for a spoon fed new lie….”  This ain’t your typical hot girls and party and hot girls type writing style. “On To The Next” has a swagger. Bryant uses a flat distortion vocal in the verses to highlight the guitar power quite well as a contrast.

Speaking of distortion, “Ride” uses an overdrive on a slower track, and I’m into it. For those who know Wide Mouth Mason, or their more recent iteration of Big And Wide (with Big Sugar), you know what I’m talking about. “Shape I’m In” is a thoughtful ballad in the vein of blues guy Johnny Lang.Now, “Eye to Eye” has some good anger to it, even though again it’s not a speedy song. You can hear the hardness in the guitar line and vocal delivery. “Judgment Day” brings to mind a mid-tempo track from a few years ago… it might not be a fair comparison, but what immediately came to mind was “What I Got” by Sublime. I apologize, but that’s what clicked.

Fortunately, “Drive Me Mad” is a solid rebound rocker.  The whole album is well produced, but this track in particular allows me to picture the band live and angry. Similarly, “Without You” has some solid drums and leads the listener on an interesting vocal journey. There’s a lot going on with “Trouble.” A bit of flat vocal processing, southern blues riffs, the rhythm section is both aggressive and complimentary. It gets better as the song progresses. Conversely, “Out There” is a quiet and subtle ballad built around a vocal and what sounds like a dobro. At one point an electric chimes in, but it’s all complimentary. Clearly an emotional effort, as the lyric says, “you never really know someone… until they’re gone.” That’s kind of sad, but “Cry Wolf” rebounds with a hard hitting and angry track.

Every once in a while, an album comes along that doesn’t quite fit a mould. Truth And Lies isn’t ’80s hair, ’90s shoegaze grunge, or 2000s genre dysmorphia. Truthfully, it’s more like a combination of blues rock based ’90s Kenny Wayne Sheppard and 2000s Canadian band Wide Mouth Mason. I can hear Sheppard like guitars, and lyrics / vocals very similar to Sean Verreault. Like those two songwriters, Tyler Bryant & The Shakedown write interesting songs that are heavy but defy a genre box.

Tyler Bryant & The Shakedown‘s “On To The Next” video:

Tyler Bryant & The Shakedown – On To The Next (Lyric Video)

The new single “On To the Next” available now. Get it here: https://tbsd.lnk.to/OnToTheNextMusic video by Tyler Bryant & The Shakedown performing On To The N…