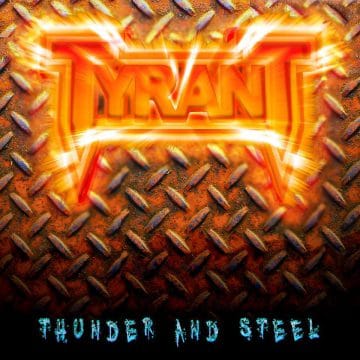 Review:
Tyrant are celebrating their 35th year anniversary this month but I have to confess that I only heard about them less than a year ago. A little digging has revealed that my predecessor Skid did post one article about Tyrant back in 2012 and although I was a big Sleaze Roxx reader prior to taking over as editor, I can readily admit that I skipped many articles about bands that I didn’t know about. I suspect that I am not the only one that did / does that judging from which articles get the most views on Sleaze Roxx. That’s just the nature of the beast.

Funny enough, I’d likely wouldn’t know about Tyrant if it wasn’t for the group’s singer Neil Wilson‘s other band from down under — Roadkill. Roadkill by the way put out a very good last studio album called E X T I N C T, which I can best describe as an old school masterpiece. When I received Tyrant‘s greatest hits album Thunder And Steel to review, I was also provided with the newly released expanded version of Roadkill‘s prior album Profanity & Innuendo to review. In full disclosure, I told Wilson that he didn’t want me to review Profanity & Innuendo and we left it at that. You can imagine what I was going to say. Tyrant‘s Thunder And Steel on the other hand is another story. I know it might feel unfair to the Tyrant and Roadkill band members but I don’t feel that many differences between both bands and particularly since both bands share the same lead vocalist (Neil Wilson) and given that Roadkill went back to old school metal with their last studio album E X T I N C T.

Getting to Tyrant‘s greatest hits album Thunder And Steel, I have to say that it’s an easy listening experience. If you like traditional uncomplicated straight up metal, you will be well served. The album is full of riff heavy galloping style rockers. As I listen to Thunder And Steel for the umpteenth time, I can honestly say that there isn’t one bad track on it. Then again, when a band releases a greatest hits package, I suppose that you expect that every song is going to be a good one. The one knock on Thunder And Steel is I feel that there are no really stand out songs. There’s no mighty anthem for the band to hang its hat on. And perhaps that’s why Tyrant, despite a long history, have never really broken through. Their “best of” songs are solid but not spectacular. Their greatest hits are enjoyable but wouldn’t be my go to record to come back to. Thunder And Steel is a greatest hits collection that I will likely always enjoy to hear but it’s not a collection that I know will blow my mind away such as a greatest hits from let’s say Iron Maiden (with whose music granted I have grown up with).

My favourite tracks on Thunder And Steel are “Daddy’s Little Girl” which sees the band branch away a little bit from its traditional metal fare, the heavier “Hellbound” which funny enough apparently appeared on Roadkill‘s last studio album E X T I N C T (now I know that my intertwining Tyrant and Roadkill is legitimate) and “War Of The Roses” which is the closest to an epic type track on the album. Overall, Tyrant have put out a solid collection of songs with Thunder And Steel that is definitely worth checking out if you like traditional metal. Congratulations to Tyrant for reaching 35 years!