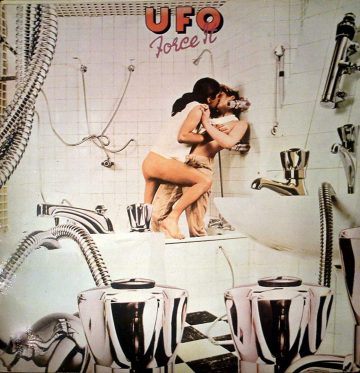 Review:
In 1975, England’s UFO were coming off of the success of the previous year’s Phenomenon, the first album to feature guitarist Michael Schenker. The band had enjoyed a good year, including its first trip to North America. Remaining a four-piece (along with vocalist Phil Mogg, bassist Pete Way, and drummer Andy Parker) for Force It, the band once again went to Ten Years After’s Leo Lyons for production duties. However, for the first time, the band introduced keyboards to the mix, which was to become a trademark of this most classy group’s sound. Another Ten Years After member, Chick Churchill, provided the keys on the album. Returning to design, the album cover was done by legendary graphics company Hipgnosis but the risqué European version was sanitized for the North American release. The many ‘faucets’ on display were a take on the British pronunciation, literally ‘force it’.

The quality of the songs on Force It is attested to by the fact that many of them reappeared on UFO’s classic 1978 live album, Strangers In The Night. Most notably, Schenker’s player came up a notch on this release, which brought further worldwide attention to the teenage phenom. Kicking off with the speedy and very heavy “Let It Roll” (one of my UFO favourites) followed by standard concert closer “Shoot Shoot”, the band had clearly left its old psychedelic influences behind and streamlined its sound. “Out In The Street” balances some tasteful keyboard work with thunderous power chords and a dramatic vocal come chorus-time from Mogg, surely one of hard rock’s most underrated singers. Side Two of the old vinyl release features a couple more of UFO’s heaviest tunes, “Mother Mary” and “This Kid’s”, both featuring dynamite riffs and the classy tunesmithing that the band became well known for.

Force It was re-released in 2007 with a previously-unreleased song as well as some live tracks. This is an album which has held up very well over the years, and if you have an opportunity to get acquainted, you will be exposed to a seminal offering from one of metal’s most influential acts.