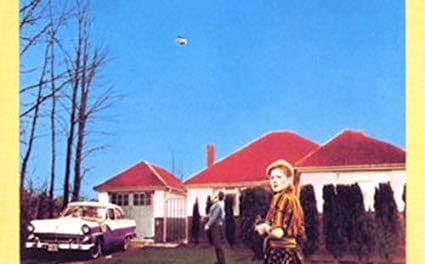 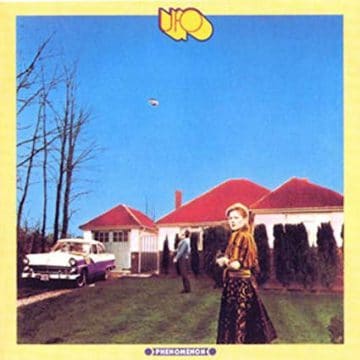 Review:
To quote from my last review, of Rush’s debut album, “Time for going waaaaay back in the time machine, 1974, when (rock) dinosaurs roamed the earth. Led Zeppelin, Deep Purple, Black Sabbath… this was a golden era for formative hard rock.” It was also a very good year for groundbreaking debut albums. I am terribly biased on this one — England’s UFO were and are one of my favourite bands. And technically, Phenomenon is not a true ‘debut’, as the band had released two previous albums with slightly different line-ups. However, the two preceding albums were of a completely different style, described as “space rock”, very psychedelic, and not an indication at all of where the band was heading. I consider Phenomenon to be the band’s true debut.

UFO were a hard working band in continental Europe, touring regularly through their native England as well as on the continent. On one of these tours, the band’s support act was Germany’s Scorpions, featuring brothers Rudolf and Michael Schenker. Although still only a teenager, Michael was already a (no pun intended) phenomenal lead guitarist, and he was certainly noticed by the blokes in UFO. So when UFO found themselves at a gig without their lead guitarist, they asked Michael to step in to help out. This favour would lead to an offer for Michael to join permanently, which he accepted. Along with vocalist Phil Mogg, bassist Pete Way, and drummer Andy Parker, thus was born one of hard rock’s all-time classic line-ups.

Produced by Leo Lyons of Ten Years After at Morgan Studios in London, England, UFO released Phenomenon on Chrysalis Records in May 1974. Young Schenker’s impact was immediate; he has writing credits on most of the album’s 10 songs. And his playing — I am not overstating in saying that Michael’s lead and rhythm work was revolutionary. Probably along with Deep Purple’s Ritchie Blackmore, Schenker laid the roadmap for the great metal to come from Europe with his precise, fast, and ‘metallic’ style. To the album, there were still traces of UFO’s psychedelic past on songs like “Crystal Light” and “Space Child” but two of the songs in particular were genre-defining for the band. “Doctor Doctor” and “Rock Bottom” both featured a more mature songwriting style, and absolutely incredible lead guitar work from Schenker. Metal classics. “Rock Bottom” became the vehicle for his extended solo during the band’s live shows. Michael recorded four more studio albums and a live album with the band before leaving in 1978. Both he and UFO continue to perform these two songs in concert, all these years later.

Check out live versions of “Doctor Doctor” and “Rock Bottom” from Don Kirshner’s “Rock Concert” in 1974 below — an incredible seminal metal performances. Find out why people like Slash, Eddie Van Halen, Zakk Wylde, Metallica, and many others are UFO / Michael Schenker fans! And the current edition of UFO is in the midst of their ‘farewell’ 50th anniversary tour. I will certainly be raising a glass to them while enjoying their classic recordings, including Phenomenon!

Reviewed by John Lewis for Sleaze Roxx, May 2019

1. Give Her The Gun2. Space Child4. Doctor Doctor5. Rock Bottom