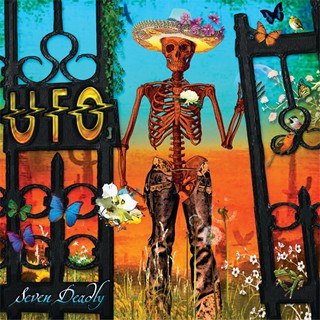 Review:
On their last album Phil Mogg and company ratcheted things up a few notches — the result was the no frills 2009 album The Visitor. The latest UFO offering is entitled Seven Deadly, and features grotesque artwork that appears to have been created with Microsoft’s paint program — its cringe worthy.

Album cover aside the music found within Seven Deadly is a continuation of the foundation (of this incarnation of the band) laid with 2004’s You Are Here. Phil Mogg isn’t an extraordinary singer by any means, but he does a magnificent job and is the right guy for UFO. Mogg remains the wily silver fox with the dry British sense of humor and the notebooks filled with clever lyrics — “Fight Night” is evidence of this.

On this, album number four of the Vinnie Moore era, UFO have delivered yet another astounding, solid, and melodic classic rock record. Once again Moore displays a great feel for what the songs need rather than laying down meaningless notes and riffs simply for the sake of doing so — he has also injected a bluesy feel to the albums that he’s played on, at the direction of Mogg. This is a great move that has given this version of the band its own identity.

The standout tracks on Seven Deadly include “Wonderland”, which has a great hook and a spectacular solo, and “Mojo Town”, with its memorable groove, great driving riff and verbose solo. Ballads have been a UFO strong suit over the years, with “Angel Station” and “Waving Goodbye” continuing that tradition. Seven Deadly also succeeds with “The Last Stoner Rider”, a great memorable mid-tempo track, and “Fight Night”, a rambunctious rocker that rivals “Hell Driver” from The Visitor.

In 2012, despite the departure of Pete Way due to health reasons — things are well in UFO land.