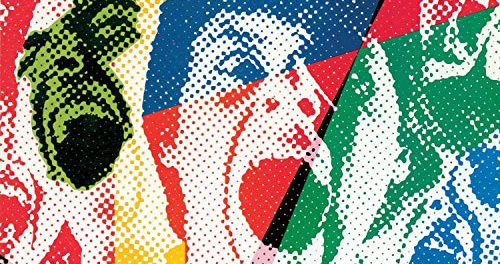 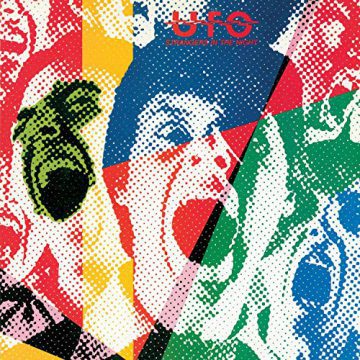 UFO
STRANGERS IN THE NIGHT
Released in January 1979; reissued in August 1999; remastered in 2008 (Chrysalis)

Review:
“Hellooo Chicago … Would you pleeease welcome from England … U – F – O”! If those words don’t bring a smile to your face and a need to put on the greatest ever live hard rock album, then you have some shopping to do. I speak, of course, of Strangers In The Night, the live double album from UFO that was not only a brilliant release, but the end of a chapter for the band. And… my personal all-time favourite album! I’ll try to keep this from running on too long…

The mid-to-late 1970s were an absolute golden era for live hard rock albums, most of which were two record sets. It’s generally accepted that Peter Frampton’s Frampton Comes Alive was the instigator, propelling this previously little known British blues guitarist to rock stardom. In fact, following Frampton’s lead, many a career (KISS in particular) was kick-started by putting out a live album. Rush, Thin Lizzy, Blue Oyster Cult, Ted Nugent, Cheap Trick, Scorpions, and on and on — all released souvenir live releases that generally caught the bands at their absolute best. Most of the albums became the subject of speculation concerning how much ‘doctoring’ and re-recording was done after the fact. — in a sense, how truly ‘live’ the albums were. However, due to circumstances which I’ll explain, UFO’s tour de force remained untouched — a true live gem.

In 1978, UFO were at the peak of their powers, having just released the classics Lights Out in 1977 and its successor, Obsession, with an absolute classic line-up of Phil Mogg, Pete Way, Michael Schenker, Paul Raymond and Andy Parker. Already stars in Europe, the band was beginning to break in North America and toured heavily to build on this increasing success. The US shows supporting Obsession were mainly supporting Blue Oyster Cult, and it is from a series of shows (mainly Chicago and Louisville) that Strangers In The Night was recorded. Ron Nevison, fresh off his boardwork on the previous two studio records, recorded Strangers, and what brilliant work he did. While some of UFO’s prior releases featured dodgy production which stifled the impact of the songs, there is no such trouble on this live set, which positively sparkles. The mix is perfect; all instruments clear and, front and centre. It is a definite ‘greatest hits’ package; all-time UFO classics like “Doctor Doctor”, “Rock Bottom”, and “Only You Can Rock Me” sharing space with killer album songs like opener “Natural Thing”, “Let It Roll”, “Out In The Street”… I could go on and on!

My personal highlights are many. Singer Phil Mogg is at his very best, one of hard rock’s unsung (no pun intended) and underrated heroes, and of course, Michael Schenker’s jaw-dropping lead guitar work is a thing of beauty. The list of people he’s influenced is endless… Kirk Hammett, Slash, Eddie Van Halen, Zakk Wylde… and hearing Schenker’s tearaway work on Strangers, it’s no wonder why. The album also features very cool artwork to boot (best appreciated on the vinyl version). A couple of notes regarding Strangers In The Night — the songs “Mother Mary” and “This Kid’s” were actually recorded in the studio with audience noise added, in order to fill the album out to a full double release. And because Michael Schenker left the band immediately after the tour, little to no ‘doctoring’ was possible (and, to my ears, none was necessary). In 1999, an enhanced version was released on CD with two extra tracks, reordered track list, and more between-song banter from Phil Mogg.

If this is not already part of your collection, spoil yourself with a late Christmas gift. This is truly a timeless album that will continue to impress and influence for many years to come.