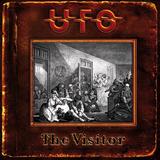 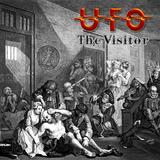 Review:
I have been critical of UFO since they issued their first Michael Schenker-less album (of the millennium) You Are Here. The issue wasn’t that Schenker was not in the mix, it was simply not a great album. Things just weren’t jelling at that point, with the addition of Vinnie Moore and Jason Bonham. On The Monkey Puzzle things were much improved and the album came together; the music was better, the band sounded tighter and Phil Moog continued to amaze.

This brings us to The Visitor, the third release from this incarnation of UFO. It should be noted that Bonham left to pursue gigs with Foreigner and the short lived Led Zeppelin ‘reunion’. Enter longtime UFO drummer Andy Parker to fill the void. It should also be noted that founding bassist Pete Way didn’t play a note on this album as he has taken a sabbatical from the band to address his health.

The Visitor is the album that challenges the rejuvenated Deep Purple as the best band to rise from the ashes after the loss of a key member. Phil Mogg sounds phenomenal as there are guys like Steven Tyler, Mick Jagger and Roger Daltry who get all of the accolades…but I’ll tell you this, they can’t hold a candle to Mogg, who can still sing like he did back in the day. There is a certain level of elegance, class and sophistication that UFO contains that truly makes them classic rock.

Vinnie Moore steals the show with unforgettable riffs and solos as heard on the standouts “Saving Me”, “Hell Driver”, “Living Proof” and “Rock Ready”. I was reluctant about this incarnation of UFO when I heard the debut, but after seeing them live on their previous tour and hearing The Monkey Puzzle and now The Visitor there is no doubt that UFO have gotten their second, third… or is it their fourth… wind. The only thing that would have made this CD better is if Pete Way were there, let’s wish him good health so he can join Phil and company soon.