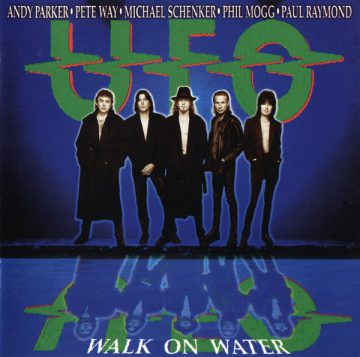 Review:
In 1995, it had been 17 years since the release of the last UFO studio album with Michael Schenker. The classic UFO line-up of frontman Phil Mogg, bassist Pete Way, guitarist Michael Schenker, keyboardist / guitarist Paul Raymond and drummer Andy Parker reconvened to write and record the highly anticipated ‘reunion’ album that would become Walk On Water. The band members enlisted the services of their friend and producer Ron Nevison (Heart, Ozzy Osbourne, MSG, KISS) who had worked with Mogg and co. on their classic records.

UFO cut eight original tracks for Walk On Water? Who knows if that was by design or whether that’s all they could muster. I see it as a plus, as the less material you jam into an album, the better the odds that the filler would be 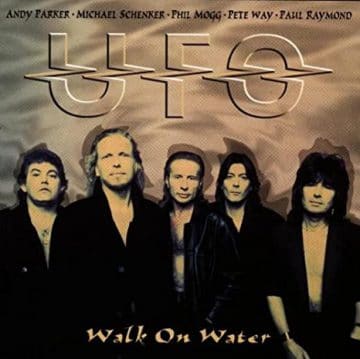 extracted and thrown to the side. Schenker returned with a ferocious, edgy performance that had been lacking not only in his own work on MSG records as well as non-Schenker UFO albums leading up to the reunion.

Walk On Water is a strong outing that certainly gave the fanbase what they had been longing for. The standouts on the album are “Pushed To The Limit” which in  my opinion ranks amongst one of Schenker’s most memorable riffs from his storied career. “A Self-Made Man” is another track that showcases Schenker’s ferocious and aggressive play. “Venus” and “Dreaming of Summer” gives Phil Mogg an opportunity to shine with his poetic charm.

Listen, it would be unfair to compare Walk On Water to the ’70s UFO classics. You can’t relive the past. Overall, Walk On Water can stand on its own as a relatively ‘good’ rock record with plenty of riffs, fiery solos and lyrical wit to make this a worthwhile listen experience. We can’t really say that about the UFO records that came after Covenant and Sharks. Not surprisingly afterward, Schenker bailed for good this time. I don’t blame him. Those were uninspired, flat and a complete bore.  As a bonus, Walk On Water closes with re-recordings of classics “Doctor Doctor” and “Lights Out.” More often than not, this kind of thing is totally unnecessary and the result is less than pleasing. These new recordings served to showcase that UFO hadn’t lost anything at all, plus it bumped the track listing to ten tracks versus just the eight new tunes.