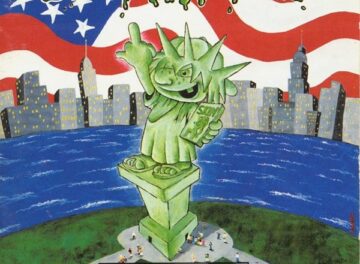 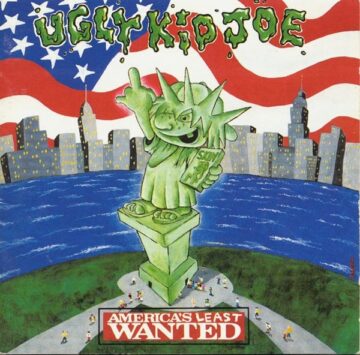 Review:
America’s Least Wanted turned 30 this year, released on September 8, 1992 via Polygram in Canada. This was during my first week of university. I was new in Windsor and didn’t know where my new record store hang out would be yet. After asking a few of the locals, I was pointed to Dr. Disc. While fact checking this article, I discovered that Dr. Disc is still open! Yay for the good guys! Ugly Kid Joe took their name by spoofing on Pretty Boy Floyd’s moniker. By the way, I love Pretty Boy Floyd too. And Whitfield Crane is still one of my favourite names of all time. This band opened for Ozzy, Van Halen, Def Leppard and Bon Jovi. I don’t remember if I saw them live back then but I would travel now to see them for sure.

Alright let’s begin. The album begins with “Neighbor” As university students who rent places while attending school, this song was very fitting and would be cranked daily. “Won’t you be my funky neighbour?” (the Canadian spelling) was a play off of Mr. Roger’s Neighborhood. I don’t think he would have enjoyed it but who knows? I would have loved to be their neighbour. Whitfield seems like a very cool dude and so do the rest of the band. I am a Dodgers fan though, so I hated his Giants baseball jersey in this video. We also caught a glimpse of Pat in this video (rant coming later).

“Goddamn Devil” featured Rob Halford who had left Judas Priest and formed Fight with Russ Parrish of Steel Panther fame. His version of Beelzebub or “Satan if you please” is perfect – sinister and rejoiceful. Great tune from beginning to end. They never made a video for this tune but I wish that had. Song number three, “Come Tomorrow”, slows things down a bit initially. It definitely picks up, with hard rocking riffs and a little bit of noodling. “Panhandlin’ Prince” is another song that I would have loved to see a video for. This is probably my favourite tune. The start of this record is so solid. I do still have it in my rotation. “Yo, Mr. Trump, can I ask you a question. You got some change to spare for me sucker?” A little prophetic right?

“Busy Bee” was my roommate Mario’s favourite song on the album. “Everyone is alright with me, cuz that’s the way I choose to be” was his motto. We lost him a few years later and to this day, every time I hear this song, I remember the great times we had. I did notice a reoccurring theme in most of Ugly Kid Joe‘s videos – Whitfield’s face is shot close up with him coming in and out of a shadow, as if he were uncomfortable with the spotlight. “Don’t Go” is a love/hate song that we can all relate to. Someone who is not good for you but for some reason you just can’t let them go. These guys were very fun musicians to listen to when they would just jam out.

The cassette and CD had a different order of songs. “So Damn Cool” was the last song on side one before you had to eject the tape and flip it over. I love the climax of the song around the 3:07 minute mark. It totally pumped me up and I would rewind it over and over. I did have both the cassette and CD. Now I am looking for a copy on vinyl (yes, I go down rabbit holes). “Same Side” begins with a funky pop bassline but have you ever wondered what the hell is being said before that? “I am looking for you. I have seen the light. I am the fire. Without the one. There can only be you, my child.” You’re welcome. It was bugging me too for a while. It then continues almost Red Hot Chili Pepper-esque.

Ugly Kid Joe’s version of Harry Chapin’s “Cats In The Cradle” meant more to me than the original. It was updated and I sensed more emotion in Whitfield’s voice. The video again is in black and white with close ups. Now that I am a father, I see this song in a new light. I am on the other side of this song – not the beginning but the end. Buy life flies by quick. We’re getting to the end and these last few songs are a bit weaker in my opinion. “I’ll Keep Tryin'” has some good guitar parts but not my favourite. “Everything About You” was very catchy when it was released, peaking at number three on the charts (edging “Cats In The Cradle” by four spots). I loved singing it to the girls that I tried to pick up at the bar. It was playful and it worked for some and if the others sang it back louder at me, then I knew my time was up. I mentioned earlier that Pat from Saturday Night Live fame makes an appearance. There were many SNL spinoffs during the 90’s but “It’s Pat” had to be the worst. One sketch is bad, let alone a movie. Thanks for nothing Julia Sweeney. This was also the tune that the band played at the MTV Movie Awards. They were introduced by Dennis Miller. Remember him?

I could do without “Madman” (’92 Remix). And I didn’t get “Mr. Recordman”. I like the acoustic touch of this song but the lyrics weren’t that great. I usually never made it this far in the CD anyways. I was having a great time. Playing air guitar down the hallways going out to the bar scene. Funny enough I did hear “I Hate Everything About You” both in clubs and bars. Overall, it’s a great album.

I have picked up all of the band’s EPs and following releases. You have to check out “Devil’s Paradise” from the band’s 2013 release Stairway To Hell as well as “Hell Ain’t Hard To Find” and “Let The Record Play” from 2015’s Uglier Than They Used To Be. The band will be releasing a new studio album Rad Wings of Destiny on October 21st. The first single that you can hear now is titled “That Ain’t Livin”. I’m picking it up. Are you?

Reviewed by Sammy The Bull for Sleaze Roxx, September 2022