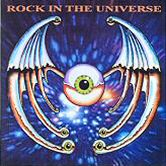 Review:
Canada’s Uncle Sid really is a mixed bag. Throughout Rock In The Universe the band flirts with traditional/melodic metal, hard rock and 70s rock. In fact at various times you can hear elements of bands ranging from Iron Maiden, Ted Nugent, Wolfsbane and Hericane Alice.

While the entire band plays great, it is the guitar leads of Henry Seto that really make you sit up and take notice. The intros to “Break’n Free” and “I’m The One” are worth the price of admission alone, taking the listener back to Terrible Ted‘s heyday. “Break’n Free” kicks off the disc on the right note with aggressive Blaze Bayley type vocals over a hard driving beat. “Dance For Me” comes across as a heavier version of the Queen City Kids‘ “Dance”, especially with the vocal delivery during the chorus. “Dream Machine” is another top-notch tune with a distorted 70’s vibe while “Time” erupts into a convincing scream-fest. But my favorite track is the melodic, at times mellow, “The Story”, which reminds me of Hericane Alice.

I can’t say that Rock In The Universe is original, because it isn’t – and at times Wolf‘s vocals just don’t seem to fit. But when they do, coupled with the excellent guitar leads, Uncle Sid becomes a new band worth checking out. Lots of potential here, they just haven’t harnessed it all yet. The new release can be found at www.unclesid.com.