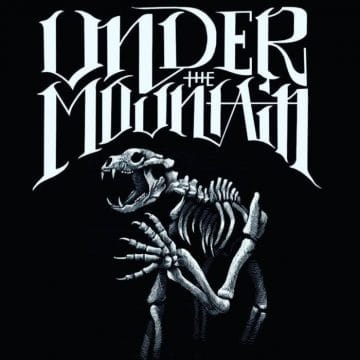 UNDER THE MOUNTAIN
II
Released on November 10, 2018 (Risqué Dique)

Review:
Under the Mountain are a Canadian band based in Nanaimo, British Columbia. II or “Deuce” is obviously their second album release, and the first to be offered to Sleaze Roxx for review. Canada is an interesting country for hard rock bands, and I’m wondering if other nations also have this issue. Often, bands from “the west” don’t register in “the east”, and vice versa. This is partly due to the huge distances and expenses the bands have to deal with when touring. Perhaps it’s a bit cultural too, but it seems like it’s always been that way here. No matter, the interweb has introduced me to Under The Mountain, and that’s gotta be worth something.

I’d like to get something off my chest before getting into the tracks. I like the production values on II… mostly. Guitars are crunchy, and back end bass and drums sound clear. The vocals however, are almost too raw. The vocals seem to be dropped on top of the mix as an afterthought. This is not a criticism of the abilities of Steve Plantz / Myles Young, but simply an aural observation.

Any fan of Monster Truck will immediately notice this band. The freewheeling guitar line in opening track “Freight Train” is lots of fun, particularly when the groove sets in during the verses. “Hold On Tight” is pretty kick ass — think a combination of The Glorious Sons and The Trews. I’m becoming a fan. The thing about “PPT” is that it’s a solid banger tune, but the bad vocal mix does make it a difficult listen at times.

That said, the epic “Valhalla” actually benefits from the same type of vocal mix. It recalls ’70s prog metal to a point. There is some tight instrumentation and a strong up-tempo section during the solo. Similarly, “Ash And Dust” reminds me of the type of sound the PMRC would call “Devil’s music” back in the 1980s. Apparently, Under the Mountain brought in Vancouver singer Dave Bell (88 Mile Trip) to handle the low-end vocal line, and it works. Curt Patrick’s moody opening bass riff to “Relapse” drew me in to this mid-tempo song. I’m not sure if it is Plantz or Young on vocals, but it’s a job well done without much in the way of backing melody. With just under four minutes left in the seven minute opus, “Relapse” breaks into a Deep Purple meets Jimi Hendrix guitar line. Nice.

“Into The Unknown” is the album’s first single and has a decidedly Monster Truck influence. Not that I mind, it’s a good rocker that would fit on modern rock radio, and about one step below Truck’s “Don’t Tell Me How to Live”.  The power rocker “Ursus” shows off the drumming abilities of Fred Xie and the tight groove with Patrick’s bass work. I have mentioned before how much I enjoy instrumentals where bands can let loose and highlight performance skills, and “Ursus” — while a tad long — lets me know that this band knows how to play.

“Whiskey Rock” is a balls-out tune. Think American Dog, Torpedohead… ok, don’t think. It’s aggressive and prefers shouting to anything close to singing. Again, Under the Mountain take an unexpected turn that isn’t all that bad. Finally, closing out the album is “Lemmy.” I asked the band’s guitarist and singer Myles Young about the song. “We actually wrote ‘Lemmy’ in one night. It was two days after Lemmy died. Steve and I went to our jam room with a couple bottles of Jack Daniels and decided to dedicate a song to him. We peppered in a bunch of lines from Mötorhead songs, which I’m sure most Mötorhead fans will pick out right away.” Yep, check. Nicely done.

I like this record by Under The Mountain. The band screams potential and has offered a solid reflection of its influences, from Monster Truck to Mötorhead. There may be one or two tracks that don’t seem consistent with the album as a whole, but at least they’re exploring other sounds. Under The Mountain are one of those bands that I will be keeping an eye on in the future for sure. Thanks to Myles Young for the chat and background info.

Under The Mountain‘s “Into The Unknown” video:

Under the Mountain – Into the Unknown

Under The Mountain‘s “PPT” video: