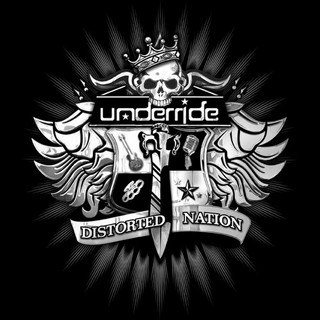 Review:
Underride‘s previous album One Of Us was one of 2008’s most impressive releases and an unexpected gem. It was the type of CD that doesn’t immediately grab the listener but instead grows on you like a noxious weed with every spin. I often find that those types of albums have more staying power than a disc that blows you away right out of the gate — they just take more time and dedication.

Two years later Underride are back with a scorching new album entitled Distorted Nation, a new guitar duo and the same slow-growing sound found on One Of Us. Some people may find Underride too ‘modern’ sounding — and it would be hard to argue with that assumption — but for me this album perfectly walks the line between classic hard rock and modernization.

What sets Underride apart from other bands of their ilk is vocalist Rev, who has an emotion filled voice tailor-made for hard rock music. Only he could take the ‘pop-tastic’ Lady Gaga hit “Paparazzi” and drag it, kicking and screaming, into a rocker with more balls than imaginable. Underride isn’t just a gimmick band though — while the aforementioned cover may expose the group to an audience previously unreachable it is during their own compositions that this band really shines. “Don’t Walk Away” is one of the highlights as it perfectly captures Rev‘s strengths while “Do Anything To Me” speeds things up for an impressive dose of rock. The opening track “Another Way Out” is a good example of how Underride uses tempo changes to give their songs a heavier punch.

While not superior, Distorted Nation is a great continuation of One Of Us — it’s equal even. And if anyone forgot how great that previous CD was the band included two of its best tracks here for your enjoyment. If anything, Underride sounds angrier on this album, which is understandable considering how long they have gone relatively unnoticed. Even though a band like Sixx: A.M. can get press and adoration because of the names involved, Underride mixes the old and the new with far better results.