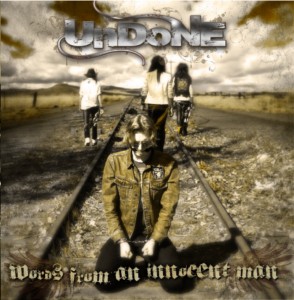 UNDONE
WORDS FROM AN INNOCENT MAN
Released on May 21, 2014 (Undone)

Review:
I must say I was rather pleased and still am, at stumbling upon this little known and unfortunately highly unsearchable named band Undone and their debut EP Words From An Innocent Man.

The band of twenty somethings (and under) hails from Stockholm, Sweden which of late seems to be a spawning ground for the new wave of glam/sleaze/hard rock that was Sunset Strip’s staple some 30 years ago and I for one will not nay say in the least. Undone have had a few line-up changes over the few years that they have been together as a band. They did release a song/video with a different singer, but I am rather fond of what Jace Ivy is bringing to the band, his voice fits them well and is perfect for the genre, full of raw emotion and strained just enough that you feel he is tearing himself apart telling you his tales. Also of note is a new bass player, Izzy Von Scarecrow, very competent and who fits the sleaze rock image to a “t”, and who upon a little digging, is a rather popular young man on the internet. Jerry Kag on drums — which you will see in their videos has all the staple drum moves down — is more than capable of backing any band and the rather impressive guitarist Van Noice rounds out the current line-up.

The Words From An Innocent Man EP is a very competently played and solidly performed five tracks. The opening uptempo rocker “Blackout” is a fantastic homage to what I am sure a number of us are familiar with and what Dave Attell affectionately calls “Time Traveling”. “Fortune & Fame” is another in your face rocker followed by the slower tempo’d “Words From An Innocent Man”. You should certainly check out the acoustic rendition the band has put together (see below) as it is very nice indeed. “Betrayed” is a sleazy hard rocker for the heart broken and rounding off the EP is the tale of addiction in “Sweet Cyanide.”

Undone are a promising young band with diverse and talented members. If you are a fan of good old no holds barred sleaze rock n’ roll, with catchy rhythms, artfully played leads, gang vocals galore and a good smattering of cowbell, than Undone will be a band you will wish to follow. The influences they state and that you will more than likely pick up on as you listen are from the staple Guns (LA and Roses) to Motley Crue to Vains Of Jenna to Skid Row to Backyard Babies… I am looking forward to what they may do next as the EP is a regular spin in my system.

We proudly present our official music video to our brand new single “Blackout”. Check out our other videos, subscribe to our channel and don’t forget to like…

This is a live acoustic version of our song “Words From an Innocent Man” from our Ep with the same name.This was very spontaneous, but hope you’ll enjoy it a…