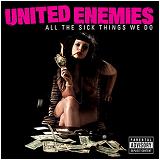 Review:
Swedmetal is a great new record label, which currently is almost a pure sleaze label (hell yeah baby!). What we’ve got here is United Enemies, a band based around Nasty Idols singer Andy Pierce that have been around since 2003. And do they ever deliver some sleaze!

From the opening of “Dead Boy” until the closing chords of “Living Dead” (actually there is a short hidden track after it, which is quite calm) United Enemies play raw, mostly up-tempo rock’n’roll which reminds me a lot of the Backyard Babies during their Total 13 and Safety Pin & Leopard Skin period, mainly because of the distorted vocals. The United Enemies do not, at any stage, reach the same level of combining sing-a-long choruses with out-of-this-world riffs like the Backyard Babies used to write, but songs like “I Don’t Wanna Change” and “Hell-A-Vision” get quite close.

My only complaint is that overall everything on All the Sick Things We Do sounds a little too much the same, but at least it does sound the same in great sound quality. Producer Henrik Larsson (The Haunted and Killer Driller) gives the band a raw but perfectly fitting sound.

Overall All the Sick Things We Do is an enjoyable release, and once again kudos to Swedmetal for releasing this kind of music.