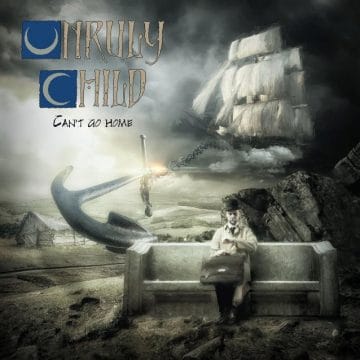 Review:
I was never a big fan of AOR. I know that a lot of Sleaze Roxx readers might disagree with me, but to me, it is often a bit too watered down, and polished for my tastes. Stating that, I don’t mean to slam bands like Journey or Foreigner, but as much as I like Neal Shon, I prefer him in his Hardline days rather than whatever he crafted with his multimillion selling smash hit of a band.

This has led me to a misleading conclusion, or maybe an assumption really, that an album that I stumbled upon, by a long forgotten band Unruly Child would be all AOR that I don’t really dig. Just to make a quick run down a memory lane, Unruly Child released a couple of albums back in the early ’90s, first of them being headlined by one Mark Free, known most notably (aside for an impressive set of pipes) for fronting Carmine Appice’s King Kobra, and changing his gender in the mid ’90s, and becoming Marcie Free. Whatever you might think of such stunt, you have got to hand it to him/her that in the vocal department, he/she is in a top league.

The band carried on with different line-ups  throughout the 2000s, relentlessly releasing records, which I have to my own shame relentlessly ignored. Not having listened to any of Unruly Child’s records, being a bit ignorant and identifying Mark / Marcie instantly with AOR, I was quite surprised that although the reformed band’s latest release is quite an AORish work indeed, and has all the cheesy harmonies, there are also some rougher edges here and there. One fine example is “Point of View” — a very cool written rocker, with very solid production which is slick but not too over polished. Another is “Foul Eleven” which starts with a menacing drum beat and then developing in a solid hard rock tune. On the other hand, you have tunes such as  “When Love Is Here” which is exactly what the title promises — an AOR anthem in its full grace and pomp — and “Driving Into The Future” which starts with one of the craziest, funniest guitar intros I have heard in a while, and then develops in quite a nice rock tune, albeit a bit too fluffy for my tastes.

The band here sounds quite solid, and of what I read on Frontiers Records‘ webpage, aside from Mark / Marcie, we have a reunion of a full original line-up here, which recorded back in the early ’90s with guitar player Bruce Gowdy, keyboardist Guy Allison, bassist Larry Antonio and drummer Jay Schellen.

The production here is well polished, which is already a trademark of releases from Frontiers Records so that is no surprise, and the band delivers a very well crafted rhythm and solo instrumentals. Together with Marcie’s vocal performance, they make a very enjoyable combination, if one likes, I stress that again, a more soft approach to rock, rather than that presented by bands such as, lets say Rhino Bucket or Junkyard.

All in all, this is quite a solid piece of soft rock album, which to me is usually a deal breaker, but here the songwriting saves the day. I got to say that this release is the first AOR album in a long time, if ever, which actually got me hooked. No way in hell is it metal in any degree, and even by hard rock standards, it is everything but hard. However, if you like something mellow once in a while, and especially if you are an AOR fan, you can clearly reach out to this release as you won’t be disappointed.

Unruly Child‘s “The Only One” song:

Unruly Child – “The Only One” (Official Audio)