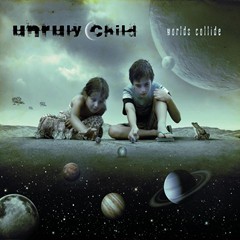 I loved this record! Simply put I could spin this one very regularly and still enjoy the big and, oh so catchy choruses. The song structures, production, rhythms and musicianship are spot on (near perfect) and the lyrical content is what should be present in any melodic rock gem with songs about love, love lost, love ruined, love pushed away, rock ‘n’ roll, staying young, holding on to innocence and the never ending search to remain young. Marcie Free (best known for her work as Mark Free in King Kobra), Bruce Gowdy, Guy Allison, Jay Schellen and Larry Antonino are all in great form — they should go buy lottery tickets because Worlds Collide is golden.

Unruly Child will certainly stand the test of time. People who enjoyed Giant‘s debut, Nelson‘s After The Rain, Damn Yankee‘s self-titled and of course the first Unruly Child disc will eat this album up like Carnie Wilson at an ‘Old Country Buffet’.

If this album represents where Marcie Free and Unruly Child are heading in the future I am on the edge of my seat in anticipation for the follow-up to this melodic rock classic. Keep up the great work and let’s hope Marcie‘s story gets published/released… I am sure she has some tales that would make Nikki Sixx blush.