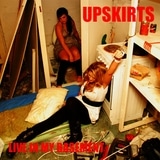 Review:
Who in their right mind thought this was a good idea? I enjoy raw music as much as anyone, but there is a HUGE difference between raw and completely unlistenable. Norway’s the Upskirts wanted Live In My Basement to capture the band’s live sound on CD, an anti-production album if you will – instead what they captured was a horrible mess.

Good luck trying to differentiate one song from the next as each track sounds the same as the last, a mish-mash of rapid-fire drumming that fails to offer any tempo changes, accented growling vocals and a sound that is complete crap. Live In My Basement sounds like an amateurish DIY punk recording, but this is 2009, albums don’t have to sound this horrible anymore. A recording such as this may have been acceptable in 1980, but technology has evolved, meaning that a band can now remain raw and mean without sacrificing sound quality.

The concept of capturing a band in their rawest form is admirable, but the results on Live In My Basement aren’t. The biggest disappointment here is that the Upskirts, while not my favorite band, are far better than this CD displays. I suggest the band get themselves out of the ‘basement’ and into a studio where their live aggression can be properly captured.

It is pretty sad when the most interesting part of an album is the artwork. Looking at the models on the cover makes everything crystal clear though. The girl sitting on the toilet represents this recording sounding like shit and the model chained to the cupboard represents me having to be physical restrained before I will listen to this CD again.