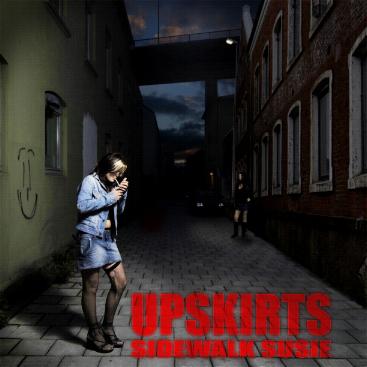 Production:
Produced and mixed by Vrangsinn and Upskirts.

Review:
The Upskirts is an odd name for a band that sounds as if they’d literally rip the clothing off women as opposed to sneaking a peek. On the Sidewalk Susie EP we have a Motorhead meets Circus Of Power meets death metal sound going on. Now I like my music aggressive and raw, but there is a fine line between that and feeling like you are being pummeled by a gang of tire-iron wielding thugs. The Upskirts don’t just cross that line, they completely vault over it!

It seems only natural that Scandinavia, which spawned the original Vikings, would also give birth to a band that sounds like they are ready to rape, pillage and destroy everything in their path. There is no more appropriate song title then “No Compromise”, because the Upskirts don’t let up for a single second. However that may be their downfall. By being so pissed-off and playing everything at warp speed, the songs begin to sound the same after awhile. I’m sure these tunes come across great live and make for an incredible show, but they come up short in the studio. Then again, some of the best bands in rock history were never quite able to capture their live sound on disc.

Honestly this album has everything I like in a CD release – aggression, attitude, gravel-throated vocals and a great drum sound. But Sidewalk Susie would be like a chocoholic eating 30 pounds of Snickers bars in one sitting – it may taste good at the time, but things are going to quickly turn sour.