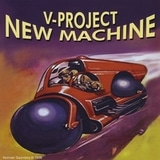 Review:
When I saw that former MSG singer Robin McAuley handled some of the vocals on V-Project‘s newest release I was pretty excited. Unfortunately by the time I got to song three my excitement turned to sadness. New Machine has a few great moments, but not enough to hold my interest.

If the entire CD sounded like the opening track “Exit Sign” it would be a candidate for album of the year. I’ve always had a soft sport for slide guitar in hard rock songs, and this song delivers that and much more. McAuley sounds as good as always, and the guitar riff lurking underneath the slide work works extremely well. Too bad the rest of the album doesn’t come anywhere near the greatness of this opening cut. The other McAuley fronted songs aren’t too bad, as they rock the hardest, and the middle-eastern influence on “You Don’t Care” is a welcome change of pace.

I don’t want to come down too hard on David Vaccaro, because this is essentially his album and therefore he deserves credit for the few good moments. By that token however, he should also be the one to take the blame for the failures on this disc, especially since he is singing on the album’s worst compositions. Songs like “Disclaimer” and “Back To My Baby” just sound entirely too weak, like the ‘safe’ music you would hear on a classic rock station or the type of music your parents would play to show how hip they were in their teenage years. I suggest that if David wants to continue in the hard rock genre that he concentrate solely on the guitar (which he at times excels at) and leave the singing to someone with more grit in their voice.

David Vaccaro has talent, no one can deny that, but I think he should stop trying to do everything on his own. If he can fill an entire album with songs like “Exit Sign” I’ll be in awe, but if he continues to find himself lost somewhere between hard rock and soft AOR I won’t have much interest.