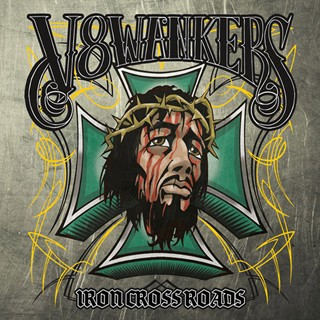 Review:
Germany — the land of good time, boogie rock ‘n’ punk in the same vein as The Wildhearts, Backyard Babies and a healthy dose of pre-crap era Saxon. Yeah, that’s what I said… Germany.

In fact a good portion of this album by Germany’s V8 Wankers is very un-Teutonic indeed. It is just big chorused, 4/4 shout-along biker rock. Iron Crossroads has its feet firmly planted in 1981, sounding very reminiscent of the aforementioned Saxon and at times Metal Rendezvous era Krokus. That doesn’t mean that it sounds dated at all, just the opposite — great production means this album sounds bang up to date. Every single song could be lifted from it and used as a single, it’s that catchy.

But herein lies the slight problem with the V8 Wankers 6th album. At 14 tracks it’s maybe four songs too long. All this good time party rock n booze is all well and good when you’re out of your box on 10 steins of Pilsner at the Oktoberfest, but a little bit of taking their foot off the gas every now and again would balance the album out nicely. If the V8 Wankers could muster up a track or two from the same mould as say, AC/DC‘s “Gone Shootin” or “Night Prowler”, it would make the rest of the album seem even more incendiary.

As it is, and as good as this album is, it’s nice when it stops. Kinda like when Lemmy leans his Rickenbacker against the stack at the end of a Motorhead gig, you’ve loved the glorious racket but really could do without having that kind of aural assault to deal with too. The V8 Wankers are doing something very simple — they are making great, beer drinking, and hell-raising rock ‘n’ roll and doing it well.

If you like Motorhead, Backyard Babies, Hellacopters and Bullet then Iron Crossroads is definitely for you. I love it — it really annoys the shit out of my neighbors, and that can only be a good thing.