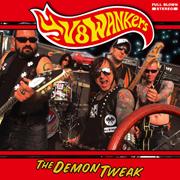 Review:
The V8 Wankers are an ugly band that play ugly music, and that’s no insult. Listening to The Demon Tweak is the musical equivalent of being smashed in the head repeatedly with a sledgehammer, which is something I don’t recommend but in this case it is rather enjoyable. There is no slowing down, no need for melody and absolutely no sentimental bullshit. What you get is loud and fast guitars, a machinegun beat and vocals that sound like the roar of a Harley Davidson motorcycle.

The Demon Tweak is almost too much to take in at one sitting, it is just so blunt and forward. I’m sure after a dozen beers though that this disc would result in some neckbreakin’ headbanging. One of the song titles is “We Give Rock A Bad Name” (a real ball-busting rocker) and most rock critics would likely agree with that, but not here. Here we like the dirt and grime that most people run away from.

Fans of sleaze metal will be all over full-throttle tunes like “Acceleration Nation”, “Bad Ass Boys” and “From Zero To Hero”. And you can’t ignore “Good Ass”, the drumming is incredible – as is the entire song.

Like a Motorhead album, you only need to hear one song to get a feel for what the CD as a whole is going to sound like. This one is highly recommended, and is also available as a combo with the Homemade’N’Great DVD.