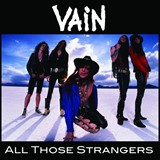 Review:
The story behind Vain‘s long lost sophomore album All Those Strangers is sad. Apparently, way back in 1991, Island Records shelved this album at the very last minute due to the label’s financial collapse, meaning that these songs have never officially been released… until now!

Eighteen years later All Those Strangers finally gets the treatment it deserved many years ago. Vain never were a household name, but their debut No Respect seems to have reached a cult status among sleaze fans over the years. This CD, while not quite as memorable as that classic debut, would definitely have been a perfect follow-up for the glam legends. While All Those Strangers may not have a song as instantly hard-hitting as “Beat The Bullet”, “Aces” or “Who’s Watching You”, it arguably is more consistent throughout than No Respect was.

For those that have stumbled across Vain before you will know exactly what to expect. For those that haven’t you’ll have to proceed with caution. While Vain is often highly regarded among rock fans and press, they aren’t the most accessible band in the world. Davy Vain‘s voice in particular can be seen as whiney and nasally, but it is that uniqueness that has set the band apart from so many others over their long and storied career.

Onto the music itself, there are some killer tracks worth pointing out on All Those Strangers. “Love Drug” and “Looking Glass” begin and end the CD on a rocking note and are great additions to the Vain catalogue. “Shooting Star” is another great song and includes some of the band’s best and most memorable guitar work. “Far Away” brings back lots of memories, as I remember it being included on a Kerrang Magazine flexi-disc back in the day, and it sounds a hell of a lot better now than it did on that flimsy hunk of plastic. On the lighter side, “Here Comes Lonely” eclipses any of the similar tempoed songs on the debut… it may in fact be the band’s shining ‘ballad’.

One nice thing about All Those Strangers is the exceptional sound quality. All too often these reissue CDs are created from unfinished demos, but in this case the album was completely finished and ready for release back in 1991, and this version comes direct from the master tapes. You better pick up All Those Strangers fast though, as this release is limited to 500 copies and is sure to disappear into thin air once again.