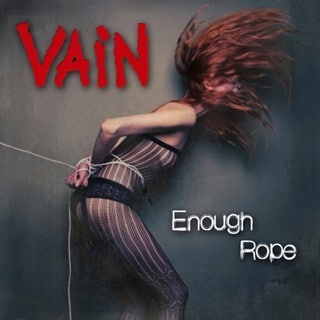 Review:
Someone forgot to send the reunited members of Vain the memo that the sleazy glam infused ’80s are dead and gone — and thank God for that! Vain has essentially built a career off of the cult success of one album, that being 1989’s No Respect and its killer singles “Secrets”, “Who’s Watching You” and “Beat The Bullet”. Sometimes it is difficult to pinpoint what makes an album like No Respect work so well, and it is even harder to duplicate that greatness — I guess the stars have aligned just right for Vain however, as Enough Rope has recaptured the ‘it’ factor that put the band on everyone’s ‘one to watch’ list over twenty years ago.

Davy Vain‘s voice sounds as great today as it did when he burst upon the scene, and it continues to be one of the most unique voices in rock — it can be hypnotic and mesmerizing as he easily drifts between dreamy and aggressive. It is that signature sound that has always set Vain apart from the crowded sleaze metal pack, but it isn’t all they have to offer. Guitarists Jamie Scott and Danny West seem determined to put their own stamp on the Vain sound with some of the best riffs in their arsenal — and they have never sounded better.

Getting to the music on Enough Rope, the song “Triple X” rivals anything Vain have recorded in their storied past with its mile-a-minute guitar riffs and sleazy lyrics. “Cindy” on the other hand is the type of dreary song that Vain have always excelled at while “Treasure Girl” drifts into ballad territory. It’s back to straight-ahead hard rock on the kick-ass “Solid Gold” in which the guitar duo tries to overtake the powerful vocals… it’s a heated battle that I call a draw. The disc ends with the one-two punch of “Vain” (don’t you love when a band names a song after themselves?) and “Worship You” which, simply put, is adrenaline filled excellence.

The ’80s seem like a lifetime ago, and in a way they were. Some of us from that era matured, others lost their way and a few are no longer with us. But there also is a new crop of glam fans (who may have been conceived to albums like No Respect) that are discovering what made the ’80s hard rock scene so great to begin with, and my advice for both the young, the old, and the timeless such as Davy Vain, is to check out Enough Rope — you won’t be disappointed.