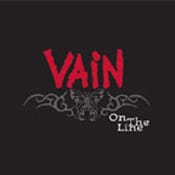 VAIN
ON THE LINE
Released 2005 (Vain/Perris)

Review:
Few bands have been able to reach the cult status of San Francisco’s Vain. Their debut No Respect is often considered a classic by the handful of people who managed to hear it, but they never seemed able to match its greatness with their follow-up attempts. Now some fifteen years later the boys have returned with what could be considered the album that should have followed No Respect. Yes Vain is back, and sounding better then they have in years.

Davy Vain still has that love-it or hate-it voice, but he sounds the exact same as he did so many years ago, time has had no effect on him. Guitarists Danny West and James Scott also sound as good as ever, laying down some incredible leads (even if On The Line as a whole is mellower than the debut). “Running On Empty”, “Lie For Love” and “On The Line” are played with the same urgency as classics such as “Aces” and “Who’s Watching You”. The group is also willing to try some new things, like the groovy “Slave” and “So Free Now” which has an almost military drum quality to it. Of course they also stay true to their roots, with “Drag Me” sounding like it was pulled straight from the Fade sessions.

With what seems like every 80s hard rock band reuniting for one more kick at the cat, it makes perfect sense that Vain would give it another shot as well. Although this time around the chances of Davy and his painted nails and bare feet appearing on the cover of major magazines is zero – times have changed (and not for the better). Once again Vain will be perceived as music’s ugly step-child and relegated to the corner of some dark room. But their die-hard fans will eat this up like Mom’s warm apple pie.

This release is as moody as I remember the band, and at times even coming across as depressing. But that is a skill Vain has always had, mostly due to Davy‘s unique nasal delivery. This is a great album if you are in the mood to time travel back to 1989 – personally I am always up for a ride back to rock’s heyday. Pick this one up at davyvain.com or www.perrisrecords.com and reminisce about how great the old days were.