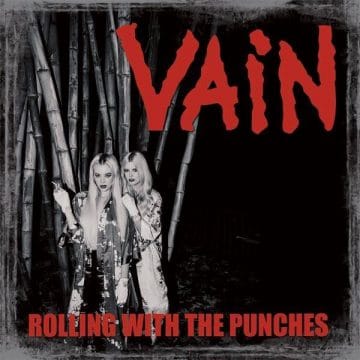 VAIN
ROLLING WITH THE PUNCHES
Released on May 26, 2017 (Jackie Rainbow Records)

Review:
It’s been almost six years since Vain took the top honours at Sleaze Roxx with their album Enough Rope landing at #1 on Sleaze Roxx’s Top Ten Albums of 2011. Since then, the group has been relatively quiet aside with the often delayed Rolling With The Punches finally getting released more than a year after the group first announced a release date for the album. Rolling With The Punches was finally released with a brand new cover altogether and all I can say is that good things are worth waiting for!

Funny enough, I picked up Vain‘s Rolling With The Punches based on the recommendation of (or reminder from) another band — Canadian sleaze rockers Diemonds. About mid-way through this year, I posted a Facebook message on Sleaze Roxx‘s page asking what people thought was the best album of 2017 to date and as my memory served me correctly, Diemonds mentioned Vain‘s latest album. I should have picked up Vain‘s Rolling With The Punches right away in any case but with all the delays, I wasn’t even sure whether it had really gotten released in the first place. In any case, Diemonds‘ reminder and recommendation was a good one — no, make that a great one.

Any Vain album starts first and foremost with lead vocalist Davy Vain‘s unique vocal delivery, which is the cornerstone of the Vain sound. In fact, the Davy Vain stamp is all over Rolling With The Punches as the singer is credited for writing all the lyrics and music plus producing and recording the album. In other words, the album sinks or swims depending on Davy Vain, and let me tell you, Rolling With The Punches not only is swimming quite nicely, it’s riding a big wave onto the shore. Even though Rolling With The Punches seems to have less faster paced rockers than Enough Rope, it makes up with some moody quality mid-tempo rockers that have a real old school U2 feel (but heavier) at times, which is not a bad thing by any means.

There’s not one bad track on Rolling With The Punches although there’s a bit of a lull towards the middle with “Bury Some Pain” and to a lesser extent “It’s A Long Goodbye” and “Inside Out.” Aside from that, all the songs are really good. The title track, which is also the opening song, is a moody rocker that builds before exploding into a great sing along track that would fit very well live alongside Vain classics “Beat The Bullet” and “Secrets.” “Deliver The Passion” is probably one of the best track — if not the best — on Rolling With The Punches with a simple yet engaging guitar riff to kick things off, a faster pace, Davy Vain‘s hypnotic vocals and a killer guitar solo from Jamie Scott. “Long Gone” keeps the pace up before Vain go back to the heavier but old school U2 feel with “Dark City.” After the aforementioned lull (three back to back slower tracks is apparently too much for me), Vain turn it up a notch with three solid rockers to end the album.

How come Vain have been able to recapture most — or at least a good portion — of their glory days (i.e. see their debut No Respect) 28 years later while many of their contemporaries release new albums that are only a shadow of what they used to do? Perhaps part of it has to do with the classic line-up of Davy Vain, Jamie Scott, bassist Ashley Mitchell and drummer Tommy Rickard playing together after all these years. Perhaps it’s because Davy Vain is seemingly running the show on everything from production to songwriting. Whatever the case, it’s amazing to see a band more than 28 years later releasing an album that stands up to what is considered by many to be their best record (No Respect). Sure, Rolling With The Punches will never attain the mystical heights that No Respect has achieved but just the fact that Vain have been able to come up with another album that stands up to that record is very impressive.