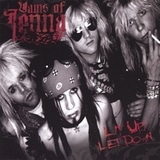 Production:
Produced and mixed by Vains Of Jenna.

Review:
I love Sweden’s Vains Of Jenna. They really bring the sleaze back to rock n roll in this great debut as it is simply awesome. I bought Lit Up/Let Down at the local Best Buy store simply based off the image on the cover.

I was ready for disappointment, but when the band opened the disc with the beginning police sirens of “Don’t Give A Damn” my attention was caught and when they took off into the song I was blown away. And they never let up from song to song as they delivered every time. I even liked the acoustic stuff, which I normally hate.

My favorite track is “Baby’s Got A Secret” with rockin lines like, “daddy’s little girl is a rock n’ roll bitch”. How could a rock fan like me not love it? The album as a whole reminds me of Guns N’ Roses‘ Appetite For Destruction, in the fact that it just sounds so dirty. That is the best way I can describe it, in a good way of course. The same applies for the image of the band as they match up a great look with sleazy music that kicks ass from start to finish.

I love this whole album from the high pitched riff of “Ceased Emotion” to the darker howling vocals of the title track which is a great ballad. Lizzy DeVine is such a great screamer yet has a very unique voice, no one sounds like him.

I promise if you like old school sleaze rock you will not be disappointed or bored by Vains Of Jenna. They fit the times but still have that old school sound to them, so that anyone who likes rock n roll can enjoy these guys.