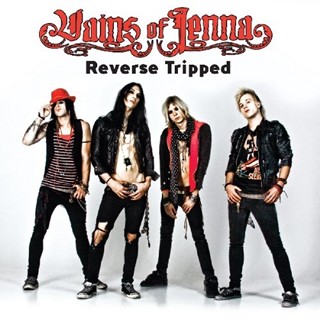 Review:
Just when Vains Of Jenna started writing songs that lived up to their early hype the rug was pulled out from under the Swedish youngsters with the departure of singer Lizzy DeVine. It was a shame, because their 2009 album The Art Of Telling Lies was a kick-ass affair — but I suppose if one has to replace the voice of the band it may as well be done early in their careers.

It took less than a week for Vains Of Jenna to find their new frontman in the relatively unknown American Jesse Forte — in fact the transition was so swift it makes you wonder if the split had been in the works for awhile. That’s beside the point however — and after introducing Forte on the four song EP We Can Never Die comes his full-length debut from the sleazy musicians… well, they used to be sleazy.

Reverse Tripped is a collection of 15 cover tunes… and an all around flawed idea. I feel sorry for Jesse Forte, because there is no way he can win with this album — die-hard Vains Of Jenna fans are going to hate the new direction and direct their scorn at the newest member. I’m not going to say that every cover presented here is horrible, just that they have absolutely nothing in common with the band’s previous sound — you get the feeling that Vains Of Jenna are selling out in an attempt to reach a brand new audience, all the while forgetting about the ones that have loyally followed them since the beginning.

When Vains Of Jenna cover Mountain they try and sound just like Mountain, when they attempt Ten Years After they come across as a copy-cat… I think you get the point. The only time Vains Of Jenna put their own spin on things it ends with horrific results — “Electric Avenue” is a perfect example as it sounds lifeless, and the annoying rap verse just makes it worse. However that pales in comparison to their re-working of Deep Purple‘s “Smoke On The Water” — covering this metal classic and omitting the signature guitar riff is a crime punishable by death (or at the very least a lengthy suspension of all musical rights)!

I’m still willing to give Vains Of Jenna and Jesse Forte another chance to see what they are REALLY capable of — but I wonder how many long-time fans won’t be so forgiving after hearing Reverse Tripped? If I knew this album was going to be nothing more a band trying to imitate a few of their idols I would have picked up a Time Life collection of original recordings from a late night infomercial instead.